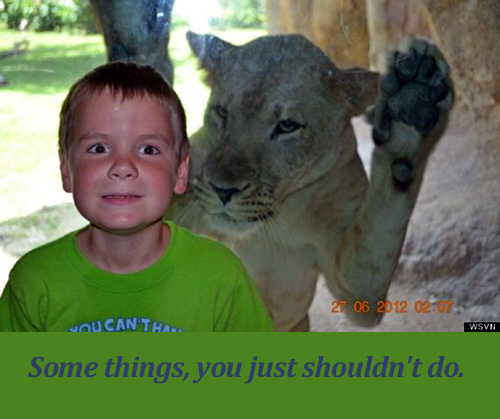 Last week’s settlement between the Pittsburgh Zoo and a family whose 2-year old boy was killed by the zoo’s wild dogs has restarted the conversation about the roll zoos play, today.

In November, 2011, a Mom lifted her 2-year old onto a railing above an exhibit of wild dogs. The boy lunged forward out of the mother’s grip and fell into the exhibit where he was fatally attacked by the dogs.

The zoo had complied with industry and national safety regulations but did increase the barriers following the incident. That was one of the key points used by the parents in suing the zoo for negligence.

The details of the suit remain confidential, but the debate has widened beyond whether African predator exhibits are safe, to whether they’re humane or even necessary.

If there’s a trend, it’s actually for fewer zoos and fewer displayed animals, although the zoos that exist are becoming larger and their displays are becoming much more elaborate.

Wild dog, relevant to this story, have likely been saved from extinction by U.S. zoos. They were in a dramatic decline several decades ago when conservation organizations led by zoos worked up a dramatic master plan to save them.

Numerous initiatives began, including habitat preservation, but unique to the wild dogs’ situation emerged a remedy that was specially effective.

Pet dogs living at the edges of wild dog habitat were transmitting common diseases that were wiping out the wild dog population in exactly the same way early American colonists wiped out native Americans with smallpox.

Inoculating pet dogs may have saved the wild dogs from extinction but it also contributed to a somewhat unexpected increase in the health of the people living nearby as well. The Lincoln Park Zoo discovered that its dog inoculation program prevented 250 human deaths annually from rabies.

The two decades long initiative to save wild dogs from extinction worked, and it is understandable that these organizations want to celebrate their success.

One of the ways is by displaying wild dogs to the public. In a healthy state, the dogs are prolific breeders and like almost all predators, their numbers are approaching saturation in the captive animal population.

So many zoos are newly trading them around, and many more zoos are beginning to display them.

It’s very difficult for me to appreciate the displaying aspect of a zoo, and I struggle to do so by recognizing that very few people in the world have the opportunities that I do to experience the wild.

But that mantra which has maintained my esteem for zoos over my life time is increasingly challenged by the massive advancements in technology. Whether it’s YouTube or online learning, holographic or 3-D projection, the modern world has increasingly better ways to “display” a wild creature.

The “display” of a real life creature always falls short of the awesome reality. But how short is short is becoming the increasingly important question.

In Zoo Miami, only a pane of glass separates little boys from angry beasts (see blog photo above), and frankly I think that’s an unprofessional leap to reduce the difference between “display” and “real life.”

But if adequate protection of observers from the instincts of predators ends up creating such a barrier, then it might just be better to get the kid an xBox.

Or, more to the point, perhaps the zoo should replace its display with a giant xBox.