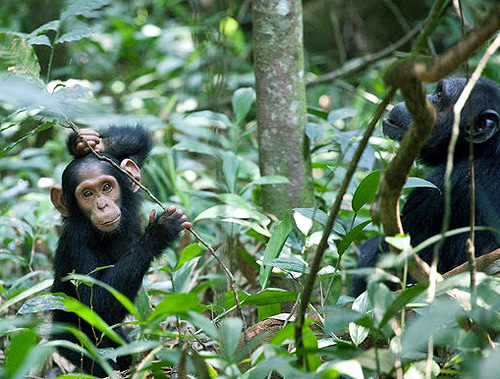 Chimps are not as endangered as gorillas, but they are increasingly controversial in developing Africa because they are so human-like.

Most westerners think of chimpanzees as sort of smart dogs. Well, only if the dog is as big as you! That’s right, a full grown chimp averages 5½’ tall and weighs 150 pounds.

This is no monkey.

Chimps are still widespread throughout much of Africa’s great central jungles. But for millennia the jungle peoples, mostly pygmies and settlements at the forest edge, hunted chimps for food. Traditionally chimp meat was an important source of necessary protein.

Babies were never eaten. An adult would be killed and the baby set free, usually to die for being abandoned. As villages and settlements developed, a secondary trade in selling these babies to westerners developed.

Forty years ago in far western Kenya, Kathleen and I had been working for hardly a few weeks when we were offered a baby baboon. I bought and raised it and tried to reintroduce Hamisi into the wild. The baboon’s mother wasn’t killed for food, but because she was raiding a neighbor’s maize garden.

Killing baby anythings seems offensive to most everyone. It was my justification for buying our little baby baboon Hamisi in the first place. But what I didn’t realize then was that a massive trade would develop, a blackmarket in animals like Hamisi, driven by nefarious western and Asian animal traders.

Today there are numerous NGOs across Africa whose mission is to thwart the blackmarket trade in wild African animals. This usually means intercepting the baby taken from the killed mother. And that necessarily means rehabilitating the baby.

One of the more successful organization in the southern edge of chimp habitat is J.A.C.K.. See their video below.

Killing grownup chimps is universally offensive to the developed mind of anyone who has enough food: It approaches cannibalism. Chimps are extremely smart, one of the few animals to actually show emotion, and often mock, taunt, stalk or spy on their human neighbors, the same way people might observe wild animals.

Unlike baboons and gorillas, they don’t raid gardens or kitchens. They’re quite good at finding and in a way nurturing their own food, and they fear humans. I think that their fear is intellectualized very much like human fear is, and very much unlike gorillas and lesser animals that are more reactive.

So I’d venture to suggest that a chimp when coincidentally passing a trader walking through the forest with bananas, that it stops to muse on the consequences of stealing them. A baboon which is much smaller wouldn’t normally challenge a man, but the moment an opportunity arises – the farmer sets down his bag to wipe his brow – the baboon may strike.

Whether this is fanciful or not, the fact remains that chimps don’t raid and pose no threat to humans, other than a reduction of a traditional food source as hunting of them is prohibited.

But the need for food is ever present. And the pernicious blackmarket in wild chimps is actually growing. The demand from the west and Asia is strong, as westerners and Asians grow exponentially richer than Africans.

That, today, is one of the major challenges in Africa with regards to chimp conservation. More and more authorities are prohibiting hunting and trading in chimps. Locally authorities justify their action beyond simple conservation – which can be very controversial — although this alternative justification applies more to the lesser primates like monkeys:

Ebola and a number of other viruses, probably like West Nile and flu varieties and possibly even HIV, originated with forest primates, mutated and were transported into the human population through bush meat.

The human/animal conflict is increasingly important throughout Africa as the continent develops so fast. Chimps are at the top of that controversy.

Like Alice walking through the Looking Glass, we stepped down into the magical Kyambora Gorge for our second chimp trek.

Only 40k from Mweya, Kyambora is a world onto itself. It stretches 21 km into the Kazinga Channel and is at no point more than about 200m wide and often much less, but about 150-200m deep. A stream runs through the bottom into the channel.

The surrounding plateau is typical QENP bush: grasslands with acacia and other trees. But once inside the gorge, the world changes completely. There are rain forest trees like podacoporus which tower above the plateau ceiling, many giant ferns and several types of palms.

It is like suddenly stepping out of one world into a completely different one.

Thirty chimps live in this rather confined area, and there are problems with the gene pool getting too inbred. Recently this has been exacerbated by an unusually high frequency of male babies.

Without too much trouble we all saw Brutus and Hatari, and some of us saw the indiscreet female who had broken the normal rule of not mating until your child is off your back, and who as a result carried a 4-year old on her back and an infant at her breast!

We found the small group of chimps after hardly a ten minute walk once at the gorge bottom. So we decided to continue on the elephant trail just to see more of this beautiful forest. We passed one cycad, the dinosaur of the rain forest, and a multitude of other palms and giant figs. The tinker birds and greenbuls never stopped calling, and every once in a while a huge black-and-white casked hornbill would fly through an opening in the forest looking like a 747.


We ended at a beautiful forest pool that our guide said was frequented by hippo in the rains.

We then ascended the gorge and our guide switched the 7 of us for the other 6 in our group. We learned that as soon as they had descended to the pool, Brutus and Hatari were there waiting to greet them!

The experience is not as intense with the chimps as at Kibale, and it’s not intended to be. This is an unusual group in an unusual space, and it was beautiful just to see!

Kibale National Park is the best place in the world to view chimps, and today our expectations were met and exceeded.

The majority of us trekked today, waiting for longer than we expected at park headquarters, for the trek which began around 11 a.m. Aston was our guide, one of the better; he’s been there since 1991.

My first trek in Kibale was in 1995. I’ve trekked three times since and to see the difference is incredible.

It’s quite easy, today. We walked out of the back of the park headquarters down a gorgeous trail filled with magical plants and wondrous butterflies and amazing trees. Less than 20 minutes later we could hear the chimps screaming and a few minutes after that, we were amongst them.

An ordinary trek takes a total of several hours, of which the majority of that time is actually with the chimps. Our family of 30 stayed with us for nearly 70 minutes.

Aston identified many of the individuals, including an old “retired” male, the second and third males in command, and we watched several mothers with babies. In fact we watched one of the mothers making herself a day nest, with the little kid pulling giant leaves around in an obvious and hillarious mimic.

The crazy vocalization of chimps that most everyone would recognize is accentuated in the forest. This is IMA sound and was truly exciting.

Aston would locate a good viewing spot and position us, and then after a while or when the chimps moved, we would, too. But we never moved very much except the one time that Aston screamed, “Run! Run!”

I looked about me to see if some aberrant chimp was descending on us, but in fact it was that we had wondered into a collection of safari ants. Most of us got out with only a few bites, but Hope Koncal spent a long time picking them off.

Aston explained that there are currently 1,140 chimps identified in the park, of which 120 are fully habituated. The habituation process takes a full 5 years, much longer than with mountain gorillas, although they do start bringing in visitors after three years.

You’d never know they once may have run from us, or thrown things at us, or charged us! I really felt it was only the younger ones who had any interest in us at all.

And we encountered many beautiful birds that seemed to sing constantly: the yellow-rumped and spectacled tinkerbirds, several greenbuls and the loud and piercing croaks of the black-and-white casqued hornbill.

Together with the forest setting, those absolutely magnificent trees that seemed to tower into the stratosphere, it was absolutely a day to remember!