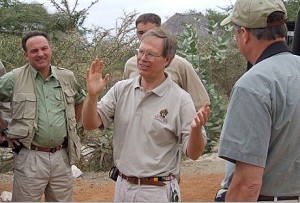 Jim Heck has worked and lived in Africa since the early 1970s, has owned and headed several companies promoting and selling African travel and has written three guide books and one novel set in Kenya.  His companies have organized safaris into East Africa for more than 10,000 visitors including most of the country’s major zoos and conservation organizations.  He has personally guided since 1972.

Jim began his career with the United Nations, working in several capacities for UNESCO, the International Institute for Educational Planning (IIEP) and the Organization for Economic Cooperation and Development (OECD).   In 1976 he and his wife formed Morgan Tours, Inc., which in 1979 became Explorers World Travel (EWT).

Since 1980, Jim has specialized in East Africa and probably knows more about the Serengeti and other wilderness touring in the area than any man alive.  But his career in Africa spans a much wider area:

He has been kidnaped in Nigeria, jailed in Guinea-Bisseau, rescued from the last Rwandan war; was the first westerner allowed to leave Addis after the Red Terror; had canoes overturned among crocs and hippos on the Zambezi; been charged by an elephant that he hit with a plate of waldorf salad; lost in the jungles of Cameroun; marooned in the Ituri Forest and rescued by Rhodesian sanction busters; and was among the few outsiders to travel through Uganda during the time of Idi Amin.  Jim has never lost a client or fired a gun.

Feel free to get in touch with Jim Heck: