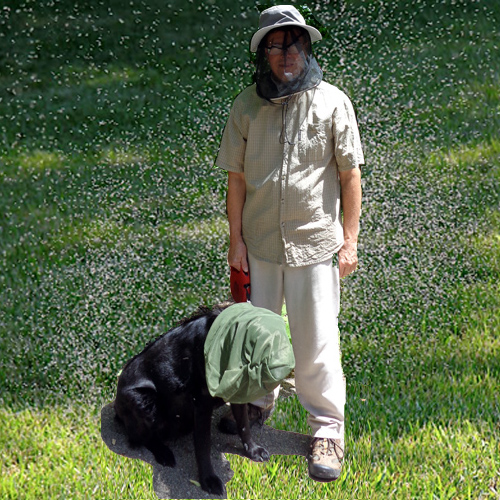 So you’re worried about too many bugs in Africa? Try walking my dog.

First timers to Africa always worry about bugs. Yes, we do have bugs in Africa and here’s an estimate as to how many and the worst ones:

TSE-TSE FLY
Tse-tse flies are the only bugs that will make you flinch. They bite, like horse flies. My worst encounter was in the Omo in Ethiopia, but few people go there.

Over my normal safari routes, the worst places are hot forests, like Tarangire National Park in Tanzania. But not everywhere in Tarangire, just in a few places, and only in the daylight and only when it’s hot.

In a worst case scenario you might count 17 to 23 tse-tse flies in your car on a game drive for about 20 minutes.

FLIES
Normal everyday house flies. The only time we ever have them is when we’re among the great herds, just as you might among cattle in the west. For the same reasons.

Flies are bothersome, but they don’t bite most people, only bad people. And the spectacle of being among the great herds is so enthralling that no one remembers there were flies.

In a worst case scenario you might count 38 or 39 flies on your car (usually on the outside) when you’re among the herds.

MOSQUITOES
Mosquitoes are bad but you can’t feel them in Africa because the bad variety carrying malaria is half-size. You don’t even know when it bites you because it doesn’t leave a mark or welt and doesn’t itch.

They only come out at night and are easily repelled by DEET.

In a worst case scenario you get malaria but you’ll never be able to count them because you can’t see them. Probably … 2.

BLACK FLIES IN JO DAVIESS COUNTY
Flipping back out of Africa to my home in North America, I estimated this afternoon on my 45-minute walk through the forest with my dog that we encountered 1,247,610 or 620 black flies.

Here’s how I determined that number:

In a 2 cubic meter area that is more or less the walking area my dog and I create as we go through the forest I estimate there are 200-300 black flies. Black flies exist primarily at 5’1″ above the ground, which is where my nose is.

They also swirl at around 5’7″ which is where my balding head would be if not covered by a hat.

So extrapolating an average of 250 flies per cubic meter, I figured we walked about 2.5 kilometers and multiply that twice for the cubic area and you get around 1.25 to the minus 1 million.

Jo Daviess County is 1,603,000,000 square meters large. Top that up to 2 meters high and you have a container that can hold about 75 trillion black flies.

That’s where I walk my dog. Remedies? People say Absorbine Junior or Vanilla Senior. Frankly I think you’d need a commercial size vacuum cleaner mounted on your head to do anything at all.

So don’t ask me about bugs in Africa.