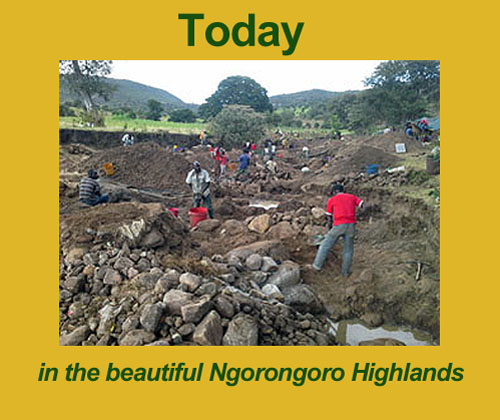 Tanzania has some of the largest deposits of gold, uranium and other precious metals in the world, and Tanzania is one of the poorest countries in the world. Go figure.

And now, they’ve found gold in Ngorongoro. The rush has begun.

For the last month rumors have grown out of one of the most besmirched areas of the country, the far northeastern area of the Ngorongoro Conservation Area, that there was gold in them thar hills.

At first it was put aside as just another “Wackie Waso.” Waso is one of the larger towns in the area where several years ago “Babu,” the Lutheran pastor turned herbalist, began dispensing a brew that reportedly cured everything from diabetes to AIDs.

Lots of people raced to Babu, literally in the thousands from as far away as the Emirates. And lots of people died.

The area is just south of Loliondo adjacent the Serengeti and due north of Olduvai Gorge. It’s been in all sorts of controversies in the last several years, including a main stop on the proposed Serengeti Highway.

This is a rich agricultural area with a rapidly growing population. The place has all the makings of a real “Wild West” community.

So when gold was reported in a seasonal stream about a month ago there were two distinct reactions: run to the place or laugh. The government tried to stem the tide, but to no avail. The rush is on.

Reports today have more than a thousand individuals panning a stream hardly a kilometer long that at its best is 2 meters wide.

Yet this week government agents confirmed it is gold. Not surprisingly, authorities announced that they would not allow any major commercial exploitation, but let the local people “enjoy the windfall.”

That may strike outsiders as strange, given how valuable a real streak of gold could be to a poor country. But Tanzania already has the world’s second largest seam of gold and has been trying to benefit from it for the last 15 years.

The Lake Victoria gold mines have been a mess for years. Mismanagement, corruption and lack of security have meant that Tanzania has been unable to benefit from what is clearly Tanzania’s greatest single “pot of gold.”

According to this week’s Arusha Times, government experts “verified that the mineral being scooped in Samunge is actually gold, but that should just be windfall for the residents of the surrounding village as well as other artisan miners because the government won’t allow large conglomerates to start excavating the newly found treasure.”

Woe is luck. Without good commercial exploitation, the Wild West Samunge Gold Rush will make a couple folks rich but most of them just miserable, especially children.

The continuing inability of Tanzania to get it together and benefit from the luck of being one of the richest natural resource countries on earth is enough to start a revolution.

But the days just go on and on. A few politicians and disreputable businessmen get rich from time to time, and the masses race for seasonal rivers in them thar hills.