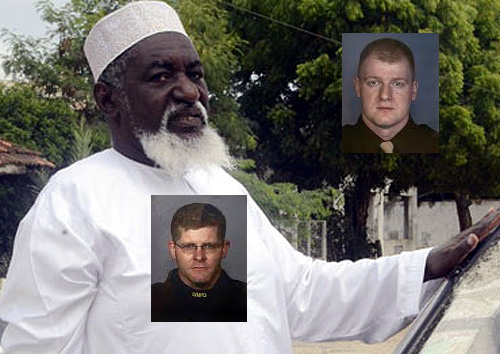 Yesterday extremists in Las Vegas and Mombasa killed good people of the establishment escalating the War on Terror.

Sheikh Mohammed Idris was shot once in the stomach by a drive-by hit squad in Kenya’s main coastal city, and he died shortly thereafter.

The sheik was famous throughout this trouble region of Africa for his moderate religious stance and his vehement opposition to jihadism.

Although the gunmen are not known it’s presumed that they killed for the ideological reasons that the sheik was so well known.

Not several hours later across the world in Las Vegas another two extremists shot and killed two policemen then a civilian before killing themselves.

The views of the Las Vegas killers were well known, and like the Mombasa murderers they killed for ideological reasons: that the establishment, the government and their agents, the police, were threatening their freedom.

It doesn’t matter that one set of killers might be more “crazy” than the others, which we don’t know, anyway. Nor does it matter that people like this are driven by injustice, perceived or real.

What matters is that the intensity of their beliefs is so strong that not even death deals compromise. Like soldiers of the oldest dogma, they will kill themselves for their beliefs and “innocent civilians” who happen to get in their way are fair game, too.

There is such certainty in their beliefs that they either get what they want or die trying.

This is terrorism. It’s the ultimate act of war, a sort of non sequitur … “Live Free or Die.”

There’s always been terrorism from the earliest times but it’s come to govern our lives today in ways much different from the past.

Societies are much more pervasive and powerful than in the past, so their opponents are more celebrated. A single act of terrorism is instantly known regardless that its actual impact on society is no greater than the murder of Marcus Aurelius.

And so societies feel more publicly aggrieved and become reactionary. A war of response and explanation is ignited between the adversaries as each sets up a battle to win. Winning is what it becomes all about: Assassinating the infidel and catching the murderer.

Terrorism becomes a process rather than a method.

In Kenya the extremely respected opposition political leader immediately announced he was attending the funeral today of Sheik Idris.

Back in the U.S. Harry Reid, the senator representing Las Vegas, called for more gun restrictions. Reid had previously said the militia with which the Vegas shooters claimed affiliation were “domestic terrorists.”

Terrorism is not going to go away. It never has. But whether it’s Afghanistan or Mombasa or Las Vegas, managing it must become the priority, not the false hope of wiping it out.

“Ending the War on Terror” is absurd. A single disenfranchised soul in the society of heaven can create terrorism. There will always be terror. There always has been.

And that’s the first step in managing it better than we currently are.

We need to recognize that even if the terrorists are nothing more than crazy, they weren’t born that way. They become that way. And it’s the society that they fight that facilitated them to want to destroy it.

We need to take responsibility for this mess. It’s as much our fault as al-Shabaab or the Bundy militants that good people died, yesterday.

Bring those murderers back to their childhood. That’s likely when the mistakes were made. What could we, the society, have done back then to ensure they didn’t turn out to become the ruthless murderers they are.