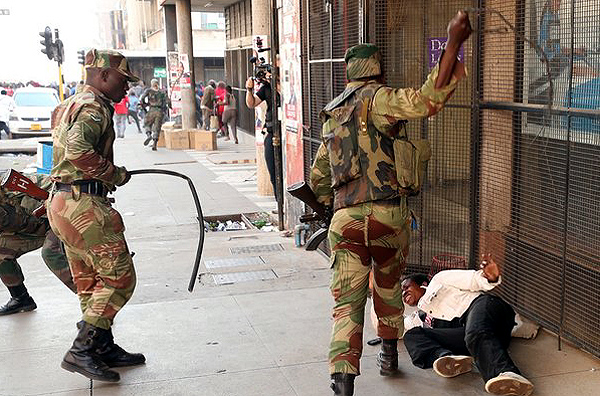 Real hopes that I had yesterday of bringing visitors back to Zimbabwe are now exactly like the three innocent, unarmed young people shot by soldiers on the streets of Harare yesterday afternoon: dead.

Final election results have yet to be announced at the time of this writing, but they don’t matter. How someone becomes a Zimbabwean soldier, I don’t know, but that is the only hope to power left to any Zimbabwean.

Zimbabwe is the Army, as it has been for 40 years. And the Zimbabwean army is often unmanageable and xenophobic: it does not like visitors. I understand it reflects the anger of more than a century of cruel misjustice, but when so much hate and violence vents through an individual empowered as a soldier, the death and destruction possible is horrific.

“It is unclear who ordered the troops on to the streets to clear the unarmed protesters, but the clashes and resultant casualties are a huge blow to efforts … to improve [Zimbabwe’s] image overseas,” wrote Britain’s Guardian newspaper today.

Most news services referred to a “few hundred” demonstrators prematurely protesting the presidential election results which had not yet even been made. The Army’s response wasn’t just unwarranted, it was a statement that it doesn’t matter who is elected, the Army will reign.

Tear gas filled the city and soldiers moved through the streets as they have for many years, establishing their ownership of society. Their use of force was exponentially greater than the protest on the street. No matter who becomes president, Zimbabwe is not ready for tourism.

An eye-witness account from the youth-driven “GroundUp” project in Cape Town reported the following:

The soldiers “were angry… It felt like a war had broken out in Harare… Some people begged to be allowed … to catch taxis home… People screamed and ran. Soldiers did not care whether they were women or men… Those who resisted were beaten up. Besides firing their guns, the soldiers also shot teargas… I heard one of [the soldiers] shouting ‘You can vote … all you want but there is nothing you can do.’

“Street kids and blind beggars who normally hang about on street corners hurried away to avoid being caught …. Within minutes the usually busy streets of town were clear. Many cars which had come into town turned back. As I jumped onto a taxi, a big lorry full of soldiers followed … They blocked the road into town and fired gunshots into the air… I was too scared to take photos of the soldiers. It was the most disturbing event I’ve ever witnessed.”

The results of the Zimbabwean election, unfortunately, are now secondary to the lead story. That story hasn’t changed for the last forty years: the ruthless Zimbabwean Army rules.