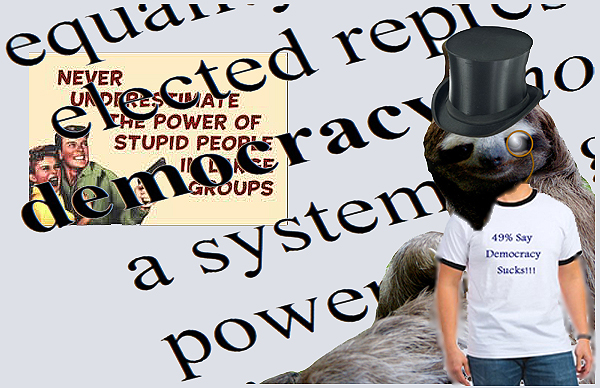 Crocodile Mnangagwa was declared president of Zimbabwe with 50.8% to his nearest challenger, charismatic Chamisa’s 44.3%.

Slightly fewer votes for Mnangagwa putting him below 50% would have triggered a run-off with Chamisa. There were 23 candidates in the race; Chamisa’s chances in a run-off were very good, and that had been his party’s strategy from the beginning. With grave concerns expressed by international observers on the election’s authenticity, Mnangagwa’s presidency is now as legitimate as Donald Trump’s.

And that’s my point. These days’ democracy sucks.

A very credible body of international observers oversaw the Zim election. Pointedly, there’s no official report from them yet. That had been expected two days ago. So far, only individuals within that body have made statements. None of them express an unqualified endorsement.

I don’t think we’ll get a final report. No democrat wants to rock the tentative government coming to power from this wobbly election. Everyone seems to accept that 84.8% of voters on the registration rolls actually voted. That would be a huge group of people to displease.

Even the South African president and the head of the regional association of African countries leaked a statement to the press regarding their displeasure with the election violence, but never formally issued it.

Modern democracy is not doing that. Pure democracy isn’t possible and there never was pure democracy, but democracy as it has existed in America from time to time should be an ideal. Such democracies have never existed anywhere in Africa except South Africa and possibly now Ghana and Nigeria.

But right across the board, today, even in South Africa a few years ago, democracy isn’t working as it should. The fact that democracy recouped in South Africa over the last two years is my own personal beacon of hope that it will recoup in America.

Zim is different, though. The unique factor in Zim is the army. There are similarities to the military regimes that existed in much of South America in the 1970s and 80s, and many now compare where Zim is going to what happened in Egypt (I don’t agree), but in all these cases democracy nearly manifest itself and was quashed by the military.

But Zim got close. We were all madly excited and that reaffirms that my soul is still deeply vested in democracy. There’s something viscerally exuberant when the people’s will shows itself.

The hazards are manifold. Take Trump, or more correctly take the 35% of Americans – a huge, scary number – who are unabashedly duped by a system of flawed democracy.

In Zim it was even higher, but the dupe there was that democracy led them down a primrose path whose trail ended at a tank. The dupe in America is much different and more complex. There are dozens of primrose paths carved by dark money, foreign influence, conspiracy and an out-of-control internet.