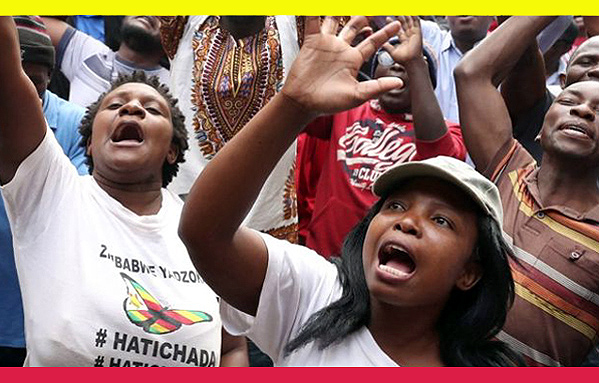 At a time when democracy has lost its cache all around the world including in America, Zimbabwe today blinked a glimmer of freedom. We’re all on pins and needles wondering if that blink will flicker or flourish.

As promised at 3 p.m. Harare time today, the Zimbabwe election commission began announcing the results of yesterday’s election, but they did not include the all-important presidential race. The commission has until Saturday to announce those results. The opposition claims the delay indicates rigging and suggests violence if they are not proclaimed the winner.

If peace holds and the losers accept defeat or a run-off election, it will absolutely mark the turning point of a belabored society that has been mired for almost 140 years in a sickly mix of colonialism, racism, and post-colonial trauma disorder that led to totalitarianism.

The only ism Zimbabwe hasn’t tried in its troubled history is pluralism otherwise known as democracy. That’s what’s on the table today. By Saturday we’ll know if it’s still there.

Like all of Africa’s countries but one (Ethiopia), Zimbabwe was colonized by an outside power, Britain. Its particular colonial history, though, was especially egregious because for a number of years it was ruled by a single autocratic white man, Cecil Rhodes.

Britain’s colonial mission was defined by the “Three C’s: civilization, commerce and Christianity” – a concept first proffered by Livingstone and which garnered so much public support in Britain governments had no choice but to adopt it.

One of Britain’s policies for promulgating its colonial mission was to encourage Brits to homestead in Africa. Just being a citizen of Britain was enough to get hundreds sometimes thousands of acres of beautiful African land. Thousands of years of successful societies that shared land was discarded as an ignorant approach to development in a modern world.

Those communities were stiffed. Their land was expropriated for the intelligent white man: the bane of colonization. The theory, of course, was that once the African was appropriately developed the correct use of communal land would render such a bounty of resources, that Africans would become richer and happier than ever.

This may seem harsh but it in theory it might have been just, but we’ll never know, because neither Britain or any of the other colonial powers had the staying power or capital to see to the end these lofty if arrogant missions. Educating the African, building the continent’s roads, railways and dams all came to a sudden halt with World War I. Nothing was completed. Everything was abandoned half-built.

The World Wars destroyed any chance of seeing colonization through to its imagined end. In a blink the colonial powers diverted all the resources that had been allocated to Africa to rebuilding themselves. “Independence” which had been envisioned towards the end of the Century was now offered immediately. Colonization died incomplete and controversial.

Even so Zimbabwe was unique among African colonies. Its first colonial ruler was actually not some benevolent power, but a single racist zealot, Cecil Rhodes. Britain actually supported Rhodes’ autocracy for a time, and you can imagine how that inflamed existing racial tensions. The tribal atrocities committed in Zimbabwe, right into modern times, are historically gruesome.

Almost all the former African colonies transited to one-man, one-vote in the 1960s and 1970s, but Rhodesia did not. (Few actually became ‘democratic.’ Even today less than half of Africa’s countries can by most measures be considered democratic.)

The white population of Zimbabwe, progeny of British homesteaders and South African immigrants, took control in 1965 in a successful armed revolt against Britain. Britain could obviously have put down the rebellion, but it chose not to. Apartheid South Africa supported UDI (Unilateral Declaration of Independent) and were Britain to have seriously fought it might have started a second war with South Africa. Brits were worried that Rhodesia could become their Vietnam.

So less than one-tenth of the population of Rhodesia became the ruling class. There wasn’t even real democracy among those whites, as the politics was tightly controlled by a small ruling elite. A sort of “Syrian democracy.”

And it wasn’t just democratic Britain that refused to intervene. America actually supported the regime, as did a number of European countries.

Finally, though, Britain negotiated a deal as the never-ending civil war in the country began to take its toll on the whites. The deal was for the first ten years of a “free” Zimbabwe, 1980-1990. The whites which then composed only a sixteenth of the population were given veto power in one of the two new legislative chambers, enough to prevent any fundamental changes to the new constitution.

That constitution enshrined many white privileges such as ownership of businesses and control of natural resources. This was a sort of Roman democracy. It didn’t work, either.

When that ten years ended Robert Mugabe wasted little time in consolidating power. Within another decade he had become one of Africa’s most notorious dictators. Democracy totally extinguished.

So Zimbabwe has tried all sorts of government. None has lasted; none has worked.

The Zimbabweans who voted yesterday are mostly fourth and fifth generations of settlers and native peoples. Their family histories transcend the troubled and disturbed politics of more than 140 years. Their deep knowledge of their country is basically of what went wrong.

Will they now try democracy?