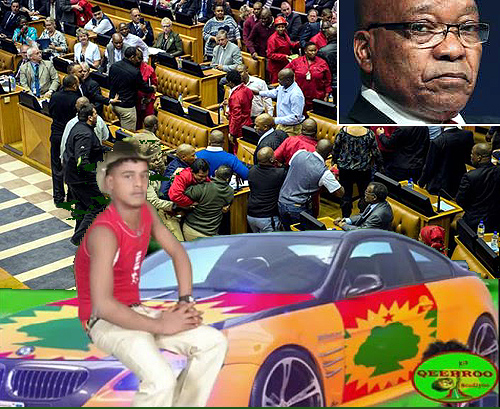 You know, it’s not just US. Enormous discontent is sweeping across the most important countries in Africa with a heavy involvement by the youth.

Such generalizations are dangerous, so I’ve thought about this a lot. I’ll stop making conclusions: you make them. Let’s just survey today’s news.

Yesterday was budget day in South Africa. In Parliamentary fashion, the president is supposed to submit the annual budget, say a few words and then Parliament retires for a day before beginning a classic debate. That’s not what happened.

South Africa is a mess. The session was six hours of mayhem :screaming, fisticuffing, security officials pulling out MPs while those just pulled out snuck back in. The budget was never discussed.

The South African’s polity’s mess has a lot to do with one old peculiar man, Jacob Zuma, and one old revolutionary movement, the ANC, but many insist that it was the university students in the country who brought it to a head.

Last year’s country-wide student protests regarding fees and instructional language have moved into virtually all universities, even technical colleges.

Last year Nigeria elected a controversial old politician/general to clean up one of the most profoundly screwed up societies on the continent. I was skeptical but for the first few months things seemed to be going well.

They aren’t now. Leaks that the new president has sanctioned arresting the old president, a very public and questionable trial of a former Senate president, rising unemployment because of falling oil prices … and police and the military now battling not only Boko Haram, but students.

Tanzania’s good-guy president is suddenly behest by a host of unexpected protests, including support of indicted government officials, growing Islamic fundamentalism, and more which all probably began with the government’s stupid move to close all universities and colleges before last years presidential election.

In an attempt to avoid the turmoil of its neighbors, the president of Kenya announced yesterday he would remain neutral in the growing student protests in his country.

But what really caught my interest is the protests of youth in countries that … well, don’t allow protests.

A week of horrific student protests in Khartoum, the capital of one of the most dictatorial, autocratic countries in the world, ended today with tear gas and police shutting down the country’s main university.

And in neighboring Ethiopia, which tries hard to rival Sudan for in violating human rights, IT savvy government officials have so far failed at shutting down this internet music protest by youth of Oromo: click here.

My apologies if by the time you read this the Ethiopian government once again succeeds.

My take? The world is unsettled and it is largely the impatience of youth anxious for justice.