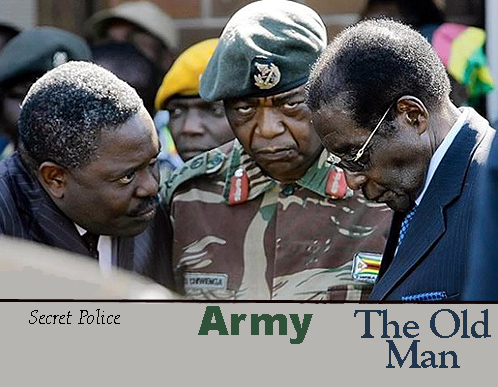 Reading the Inyanga tea leaves, studying the day-old photographs, it appears to me that Robert Mugabe wants to turn control of Zimbabwe over to the Army but just can’t. He just can’t give up the reins of power.

If he did it could avoid more bloodshed but at the same time might even further perpetuate Zimbabwe’s sad oppression. Never in my life has there been a country in Africa so raped of its potential by its self-imposed leaders as Zimbabwe.

The possibility that Zimbabwe’s North Korean-like behaviors and criminal neglect of its educated population, natural beauties and rich natural resources might continue for another generation takes my breath away. It just seems so unfair.

Mugabe is 92 years old and feeble, possibly suffering from dementia. The single greatest indication that the time is nigh is how quickly this week Zimbabwe’s false and always artificial economy started unraveling:

But Mugabe’s power is so absolute that until a change of power is signaled by him publicly, or until he dies or effectively loses control of reality, those waiting in the background won’t move.

Until recently his wife, a generation younger and allied with the secret police, was arranging a transfer of power from Mugabe to herself. Apparently, though, the old man didn’t approve. She’s fallen from the limelight.

So in stereotypical Cold War, despotic fashion, the sidelines are drawn: the secret police vs. the army. Each desperately wants the old man’s nod, so that they can obliterate the other. They have begun the inevitable posturing.

Waiting for the old man’s nod.

The fictitious political “opposition” which over the last several decades has done little but provide another reality TV show drama is powerless. Citizens of Zimbabwe are so beholden to the system which oppress them that like the citizens of North Korea it’s arguable they have little sense of the outside world.

Which is amazing because unlike North Korea Zimbabwe simply doesn’t have the resources to block the internet, for example. But when the time comes, there is no political opposition organized enough to do anything but present their scarred bodies to more police brutality.

If the old man doesn’t nod and simply fades further away, the secret police will ultimately battle the army and it will be bloody.

No one knows and no one knows who will emerge as the new despot. The shorter the conflict, the more powerful the despot who follows.

The longer the conflict, the more lives lost and resources plundered, the greater the chance the world and especially Zimbabwe’s South African neighbor and benefactor might sit up and do something proper. But I don’t see that happening. I think it will be short and deadly.

And the second generation of a Lost Zimbabwe will begin.