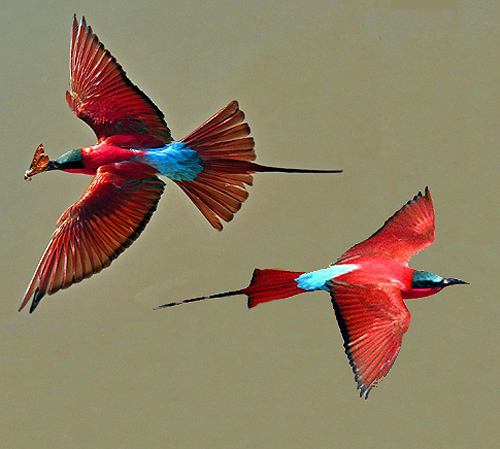 Two months ago I was in Africa documenting a different migration. Of all the birds I’ve watched going and coming in both hemispheres of the world, one story really stands out: Africa’s carmine bee-eater.

This “migrant” makes three separate migrations, changing its direction three separate times and it tells us probably more about long-term climate change than any bird in the world.

For most of the last several hundred years of its documentation it has bred in the northern parts of southern Africa in springtime, essentially along the Zambezi and its many tributaries.

Over the last century and half, though, it began moving out of its traditional range. They are regularly seen now in East Africa. This would be analogous to seeing some of Costa Rica’s beautiful birds in Missouri! (There are even reports of carmines in places far west in the continent.)

The carmine is a large bird (24-27cm 62g) but not a predator – not a meat-eater or a fish-eater or a worm-eater, so it must breed in places with lots and lots of bugs. But it’s big, strong and a masterful flyer so capable of traveling great distances.

Like all birds it breeds where its food source is best, so that it can raise young.

Bugs tell us a lot about the climate. They go dormant quickly with dry or cold weather (into the egg or pupae stage) and then remain so for long periods of time before quickly emerging with a drop of rain and bit of warmth, then reproduce.

Quite contrary to armchair travelers’ notions about places like Africa, often in North America’s summer there is a greater density of bugs than is ever found in Africa. So the carmine bee-eater is challenged. Especially in Africa where climate change is so rapid and so harsh.

When an animal species gets separated, it often speciates. This happens when land masses move apart, or glaciers interrupt ranges. But it can also happen when the food source fractures.

(Important Note: Many of the more prominent East African ornithologists disagree. They insist the bird is still a single species and that merops nubicoides doesn’t … at least yet … exist.)

Yet even within the main species that everyone agrees exists, merops nubicus, really weird things are happening. There are today at least four separate breeding groups that nest at slightly different times.

The earliest breeders are in Zimbabwe and Namibia (in August). A month later groups begin breeding in Botswana and Mozambique.

It would be similar to the Baltimore Oriole nesting in Iowa and Ohio in April, and Illinois and New York in May!

This fractured survival technique is because the weather has been changing so profoundly that the food source is being incredibly fractured. The bird is adjusting.

Not only with its breeding. After it breeds it migrates north (as much as 650km). Then it turns around and heads way south before finally turning back north to seek its breeding range.

Africa is a patch-land of wetlands and deserts and it wasn’t always like this. It probably began in the 17th or 18th century, very slowly and in concert with the industrial revolution. In my life time the change has been so rapid that many of us have personally witnessed it.

In my own life time in Africa I’ve seen radical changes in the Kenya’s northern frontier and the Serengeti. I’ve watched literally before my eyes “ecological zones” grow increasingly smaller and unique.

Obviously so has the carmine bee-eater. This magnificent animal is adjusting to climate change best it can and by so doing demonstrates to us how rapidly and perhaps uncontrollably earth is changing.

No matter what the ultimate fate of the carmine bee-eater will be, it will always be remembered as the bird that proved climate change.