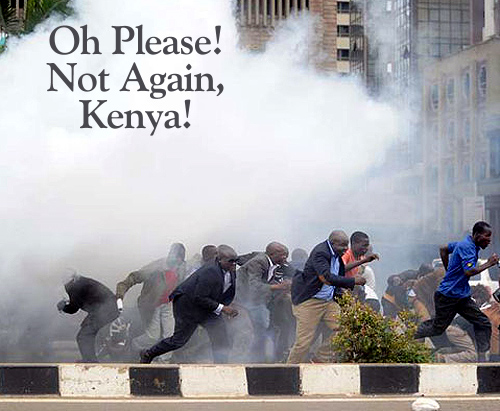 The news is not good out of Kenya. Not totally worrisome yet but troubling.

Several public demonstrations which I see as markers of robust democracy have been met with too much government force. We all know the counter reactions this brings, and that’s what worries me.

If the Kenyan authorities don’t soften their act soon, all the progress Kenya has made in the last 12-15 months will be lost.

It began last month with university demonstrations. In the last few days two completely separate incidents, one involving a protest of the election commission and another regarding the arrest of a Muslim cleric both degenerated into a real mess when the police unnecessarily fired teargas, shot into the crowds and starting beating protesters.

We know what using too much force does: spawns more violence. This morning more protests continued in the streets of Nairobi and so far, anyway, the police are behaving themselves.

The issues aren’t really the issue. University demonstrations are chronic through Africa, protests over election officials seem endless, and the mounting religious tensions all over the continent are leading to religious demonstrations.

Nothing’s wrong with all of that. Healthy protest is a reflection of a healthy democracy and is supposed to generate a mediation or negotiation process that leads to lessening tensions.

But in Kenya recently, just the opposite is happening.

The government is clamping down like never before. Police action is brutal. At least five protesters in the demonstration against the arrest of the Muslim cleric were killed by police. Photographs suggest some police state in creation.

In the case of the protests over the election commission, there were less than 80 or 90 people protesting, almost the same number of police who confronted them.

That one is particularly troubling as it could be harbinger for the 2017 national elections, and even more poignant because among those tear-gassed was Raila Odinga, the leader of the opposition.

Almost simultaneously other small violent protests erupted in other parts of western Kenya where Odinga commands the polity.

Even a hint of upcoming election violence could doom all of Kenya’s progress in the last few years.

Kenya has enjoyed remarkable peace over the last year compared to the terrorist inflicted violence that destroyed tourism several years ago. Its economy is good and the people seem prosperous.

It’s all on the table, now, and it’s all a simple matter of how to deal with opposition.

The answer is not police batons and tear gas.