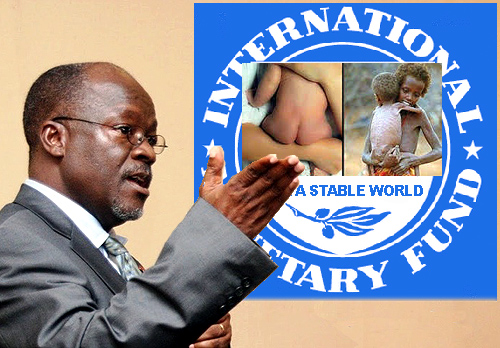 Trickle-Down economics slams Africa and its leaders line up like misbehaving school kids to take the paddle.

President John Magufuli of Tanzania just reduced taxes. There’s no worse move at a time when Tanzania needs stimulus not austerity. All the creativity and imagination Africa has shown in the last several decades has been smothered by western starlight.

The “spring meetings” of the IMF and World Bank confirming that African growth is tanking so scared African leaders that they’re now doing exactly the wrong thing: playing capitalism at its worse.

The global economic system is stacked against the poor. It’s why China ultimately embraced it but also why China, India and Brazil will always play second, third and fourth fiddle to the puppeteers in the west.

The reason Magufuli’s move is so illuminating is that it exactly reflects what China did multiple decades ago: give in.

Tanzania’s economy never performed in any outstanding way, especially relative to its neighbors like Kenya and Ethiopia. Corruption is the main reason, but as I’ve often proved, corruption is western Trickle-Down. To bribe a Tanzanian official to build a ridiculous anti-missile defense system there has to be a briber. The briber is always from the west.

So it doesn’t matter that Tanzania is sitting on the world’s second largest streak of gold, or that it has some of the finest uranium deposits on earth. It doesn’t matter, because the capital that it takes to exploit this rests solely in the west.

And the dosey-doe game Tanzanian officials play with their bribing counterparts stalls development.

Modern Tanzania was born of Cold War China. Listen, that didn’t work, either, but the initial goals of humanism above capitalism still strike me as profoundly correct.

The first president, Julius Nyerere, was such a wonderful person. He began swimming in Chinese capital that allowed him to revolutionize education in at-the-time terribly illiterate Tanzania. He still wears proudly his nickname, Mwalimu, “teacher.”

But humanism grew doctrinaire, too, in China then Tanzania. Mwalimu tried to collectivize villages almost at the same time that they were failing in China. So the experiment didn’t work. The Cold War ended. China changed faces and Tanzania went flat out broke.

Well, like any good ole radical, Tanzania now seems to have flipped completely.

Humanism was and in most cases still is African’s main mission, and I remain hopeful that Africa can demonstrate this lesson to we egocentric capitalistic westerners.

Tanzania like Ethiopia and Nigeria should slap the western banker in the face. A one or two penny drop in payroll taxes is nada.

The government’s own mouthpiece, the Daily News, pointed out that “its effect on disposable income is insignificant.”

But its effect on education, tourism, mining and road building will be profound. So Tanzania will remain beholden to the west yet again, for aid and miserly capital. It will be incapable of generating its own wealth.