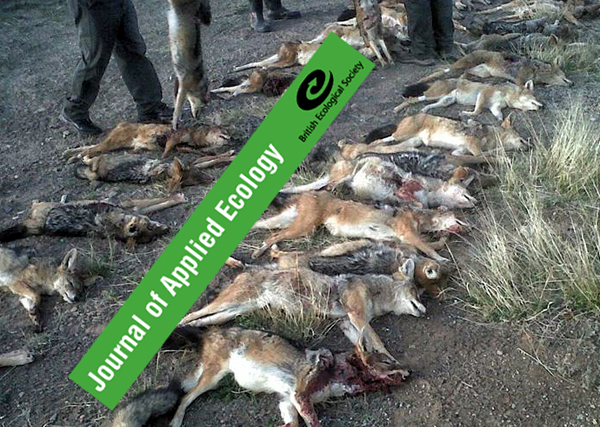 File “science as scandal:” For a long time South Africans have culled heavily in their national parks even as many scientists vociferously argued against doing so. Now it seems that in some kind of warped tolerance if not outright trickery South African officials managed a big cull of jackals… to prove that culling jackals doesn’t work!

Why would they cull to prove culling doesn’t work? Well, that we don’t know. What we do know is this:

From elephants to crab grass for nearly a century, wildlife officials throughout South African liberally culled to trim species numbers to what they determined was the proper “carrying capacity” of the ecosystem.

Culling is controversial but widely used all over the world. Deer harvests in the U.S. are often discussed in scientific conferences in exactly these terms. But many scientists argue that culling doesn’t work. Many of them are in South Africa.

The main theory used to counter culling is called “source-sink dynamics.” The contention is that no matter how much of a species is eliminated at any given time, mechanisms in that species emerge to rebound its numbers to their pre-cull levels.

The mechanisms differ with the species. With deer and most antelope, for example, the theory argues that at the periphery of where the culling occurs there will be an out-of-balance over population that will as soon as it can spread back into the culled area. Birthing increases. There may be two births a year and many more twins, for example.

This bizarre incident involved black-backed jackals. Jackals live in clan groups in extended territories ruled over by an alpha pair. The pair restricts breeding often to a single female in the group. If the alpha pair is culled, all females begin breeding right away, exploding the population at the periphery of the culling area and ultimately seeping back into the culled area.

Jackals in Africa, like wolves and coyote here at home, are widely considered vermin by farmers. The South African government has funded many programs over the years to assist farmers – particularly sheep farmers – with ways to kill jackals. Conservative wildlife management schools in the United States have contributed to these efforts in tandem with efforts here to cull wolves and coyotes.

But never before in a national park. Although South African national parks are where a lot of culling occurs, it’s rarely of predators, which are the natural cullers!

But in this bizarre incident, jackals were definitely killed in three national parks: Addo Elephant, Karoo and Mountain Zebra. Note that all these parks adjoin areas of sheep farming.

The study was conducted by a grad student from Nelson Mandela University, Liaan Minnie, and the findings published in the British Ecological Society’s Journal of Applied Ecology.

Oh, is that so? How come? And how convenient for his study? His finding involved 573 culled jackals – 327 on farms and 246 in the three protected reserves adjoining the farms.

When news of the study became known last year, many South Africans were outraged. The head of the Landmark Foundation led the charge and forced an ethics ruling on the study that should have been applied for long before the study was granted by national parks.

Others pointed out inconsistencies between the actual paper that was published and numbers available from the national parks. This has led to many asking that the British journal retract the paper.

By the way, his findings are consistent with source-sink theories when applied to jackals. You know what that means. Better keep culling or they’ll overpopulate.