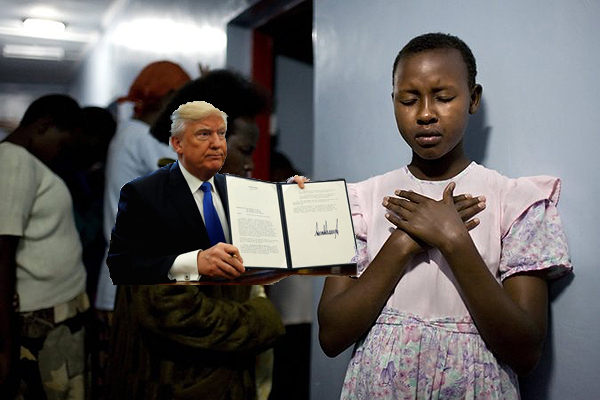 The 2016 U.S. budget included $607.5 million in funding for reproductive health internationally. If Trump’s executive order is taken at face value, that stops. I guess we need it for the wall.

The “Mexico City Policy” which Trump reinstated by executive order yesterday was initiated by Ronald Reagan, reversed by Bill Clinton, reinstated by George Bush and reversed again by Barack Obama. So it wasn’t surprising that a non-Democrat did this: withhold American foreign assistance to groups that provide abortions.

But with each iteration the reversal or the reinstatement became stronger than the previous version, so each change had a greater impact. Trump’s order verges on the ludicrous (and, in fact, may make it more difficult to implement).

I obviously don’t like Trump. But this order so heavily impacts millions of Africans who had, thanks to America and elsewhere, pulled up their boot straps and were on their way to much better health – that it’s nothing short of heart breaking. It leaves you feeling enervated. We can’t organize a march on Washington by 30 million African youngsters.

“As the new president of one of the most powerful countries in the world, it is paramount to observe and understand that women the world over deserve respect and dignity at all levels,” the Kenyan-led African Womens Group, FEMNET, proclaimed and did not comment directly on the executive order.

They dare not. Hundreds of womens’ advocacy groups now walk on pins and needles, amazed at how American charity pivots to punishment with the single stroke of a pen.

Here’s what she means: “Family planning” provides numerous ways that a young women can avoid or handle unexpected pregnancy. An exhaustive World Health Organization study in June, 2011, clearly documented how the Bush era order “dramatically” increased abortions and unwanted and untreated pregnancies in the developing world.

This U.S. government’s own 2006 GAO follow-up to Bush’s order pointed out how difficult it was to implement, and reported that its effect was to seriously limited all HIV Aids funding globally.

So even before Trump took the wrong side and threw it into Darth’s black hole it had been proved counter productive. That, of course, gets into the whole curled mind of the ideologue conservative who never seems to learn that what he really wants he’s constantly destroying better than any of his foes.

Good guys are trying to come to the rescue. The Dutch government in warp speed announced the organization of an international fund to replace what Trump has just cut.

The Dutch do what they say, and that made me and I think thousands of Africans feel much better. But it’s still a kink in the maize of development, another bureaucratic hurdle that will have to be overcome.

Trump is irrational; we can’t blame him. He has no idea what he’s doing. He doesn’t have the smarts to know how to have broadened the executive order in a way that it applies to almost anything. That was neither random or unintentional: it was mean.

We must discover whose pulling the puppet strings, because it’s a darker and more sinister master than I ever imagined possible.