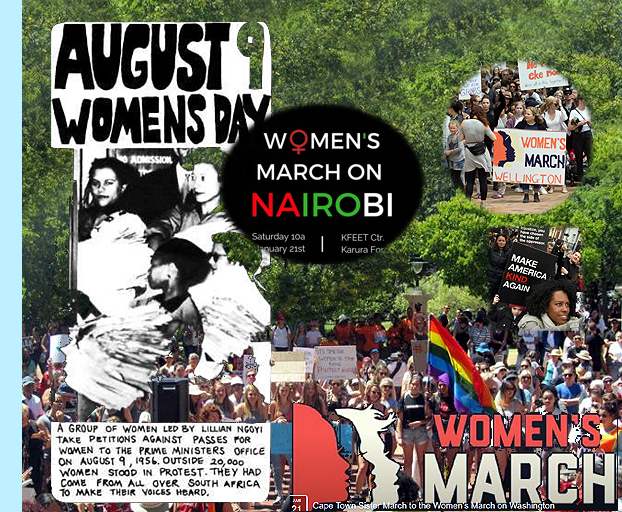 Take heed oh women of America of your African sisters’ history. This was not the first such women’s march in South Africa. That was in 1956 and what followed it was … 37 years of unimaginable repression.

Saturday’s marches in Africa were clearly in solidarity with the American movement. A pamphlet circulated outside the Izikio museum in Cape Town where the women filled the Company’s Garden charged Trump “threatened decades of international gains in human rights.”

“It is important to resist Trump’s conservative policies from day one,” one of the featured speakers, Dean Peacock of Sonke Gender Justice yelled to the crowd.

But as I surveyed the news of the marches my elation turned cold. On August 9, 1956, when Americans were newly gathering around their black-and-white TV sets and playing around with new “gas ovens” and most white American women stayed at home to prepare the evening’s tuna fish casserole after their lady’s bridge party, an unbelievable 20,000 women descended on Pretoria’s government center to protest one of the last pillars of apartheid.

They failed. They came from all over the country. For some it took weeks. They brought horror stories with them of the effects of apartheid which had dramatically, but slowly and steadily increased in the early 1950s until it had successfully sequestered race from race in Africa’s most prosperous country.

In apartheid’s initial iterations only men were the targets of the draconian laws, because women either didn’t work or were necessary staff for white homes. But the momentum that the terror of apartheid caused was unstoppable even by some of its creators.

In January, 1956, the government’s apartheid laws began to include women. It took a number of months for the trademark “passbook” to be handed to most of the non-white women in the country, but by August 20,000 women who were putting their lives in danger placed a petition directly in the hands of Prime Minister J.G. Strijdom on the Union Steps in Pretoria.

20,000 marchers back in 1956 could likely be one of the largest organized group of demonstrators the world had ever seen. It was more than the attendance at either the 1956 winter or summer Olympics. It was a larger group of women than constituted female fans at the ‘56 World Series between the two New York teams, the Dodgers and Yankees.

Many will dispute this. August 9 is now a holiday in South Africa that celebrates the women’s movement that the march spawned. That movement was noble and incredible, and my own daughter joined its remnants when she attended university in The Cape years later.

It was most incredible in my view for being so diverse. There had, of course, been South African men including elected representatives who aggressively fought apartheid, but you’ll be pressed to find many groups that were integrated, publicly or privately.

The August 9th march in South Africa was the first rainbow coalition of protest that has today become part and parcel today of the South African soul.

The song that the assembled 20,000 broke into after the delivery of the petition to the Prime Minister in 1956 resonates still today, historically and in pop culture versions:

I have no doubt that without the sustained and prolonged protest by South Africa’s women apartheid would not have fallen when it did.

But hear my admonition.