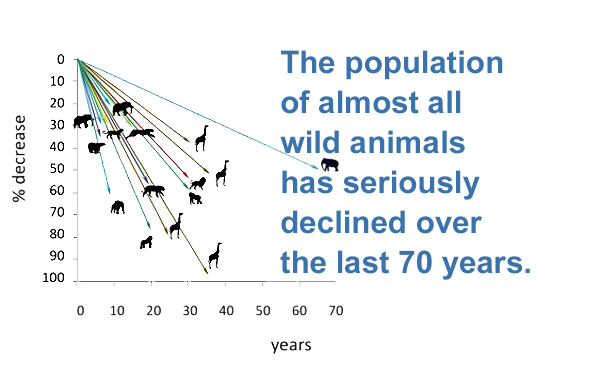 Today is World Lion Day, an unofficial designation employed by wildlife organizations. In the last quarter century the population of The King has declined dramatically. World Lion Day is intended to focus public interest on The King’s travails.

Needless to say public interest in The King is the highest among wild animals and that directly translates into interest at academic and public levels. Unfortunately, the huge amount of consistent data gathered on The King’s decline is not generating enough correct public policy. Most field efforts by the big-name conservation organizations fail to show sufficient consideration for the local people.

It’s offensive that more resources are deployed to save lions than the red duiker. All the animals and plants and birds are woven into the wild kingdom interdependently. Study the graph at the top of this article. Animal declines are across the board: none is any more important than another, and so the proper approach to saving lions or elephants or red duikers is to save the ecosystem as whole.

But it’s even more offensive when the issue isn’t broadened over the “whole” ecosystem to include human beings.

Good science has established the causes for the lion’s drastic decline. They are numerous, running the gamut from climate change (which alters the migratory routes of principle prey like wildebeest and zebra), to onerous viruses (from the consumption of infected buffalo), to habitat contraction (like running a new modern railway through Nairobi National Park).

The most publicized cause, though, is human poisoning or other killing. As local herding which was initially a nomadic lifestyle transforms into modern animal husbandry, stock like cows become more valuable. Subsistence lifestyles are displaced by more expensive modern ones.

Everything becomes more expensive from the cow to the electricity to the generator that heats the stove. The death of a single cow, today, has exponentially more impact on the life of the modern rancher than it did to his ancestor’s herders. The ante’s way up.

When a single migratory wolf came through our area recently (we see wolves about as much as alien spacecraft) it found a local sheep farm. The treasure find suspended the animal’s migration and over 3 weeks it killed 7 sheep. Finally, the guns were organized despite the animal being on the endangered species list.

That’s exactly what’s happening big time in the Maasai areas surrounding many of East Africa’s major parks, especially Kenya’s Maasai Mara. Many of us take it very personally as we’ve followed certain healthy prides for so many years.

The great Mara Marsh Pride which had nearly 50 years of documented history including the featured role in the BBC’s Big Cat series has been essentially wiped out by poisoning. In each lion’s death, it was retaliation for the killing of cows or goats.

Frankly I believe a large responsibility falls squarely on tourism. The increased number of visitors getting closer and closer to wild animals has lessened the natural fear of humans. This has emboldened the animals and increased the potential for livestock raids.

I’m not sure, though, if any of this matters more than the fact that the rancher doesn’t want to be prioritized below the wild animal.

Several organizations are trying to address this. Animals & People is one that concentrates on helping farmers living on the periphery of Tarangire National Park in Tanzania to better protect their stock with more modern stockades.

Ewaso Lions has undertaken yeoman work educating area ranchers not just on ways of protecting their stock but on the overall value of maintaining the Samburu (Kenya) ecosystem in the face of a massive assault by climate change.

These are all well and good and the two I mentioned seem to be having some positive results over the last few years. But it’s uncertain how long the good news will continue.

The world is under assault as never before. India is an excellent example of how the wild is compromised for the benefit of an explosive, rapidly modernizing population. There are essentially no wild tiger anymore. There are several reserves with tigers, but to call them wild as I experienced them 30 years ago is a stretch.

Africa has a bit more time than India did to adjust to its growing population and decreasing wilderness. There’s just more wilderness and despite a massive population growth, nothing like India.

The key is pretty simple. If peoples’ coefficient of happiness increases fast enough – or even just increases rather than declines – sensitivity to the ecosystem ought to grow organically from the remarkable increase in attention that it got in the last half century. Whether it grows fast enough is the ultimate question.

Those of us who care ought make sure our principal concern is with people. Concern for animals and all our ecosystem will then follow naturally.