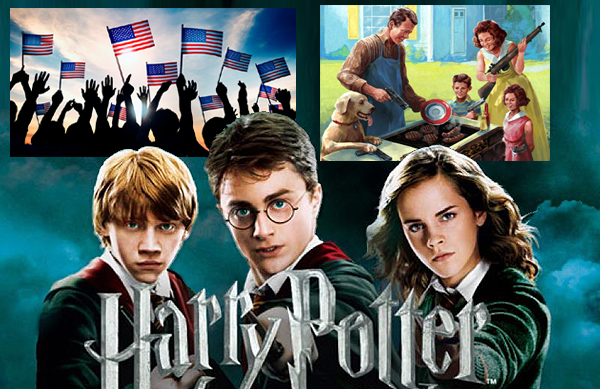 Was Donald Trump brought to power by Harry Potter?

Don’t laugh. Outrageous ideas sometimes carry bits of insight even if only from understanding why they’re wrong.

Pambazuku is an intensely intellectual, left of left not quite communist forum for some of the greatest thinkers in the Third World. I’m often turned off by their vitriolic swipes, but their facts are razor sharp and rarely do any of their prolific analyses lack insight.

Written for and mostly by emerging world intellectuals it’s important to understand where they’re coming from.

The Emerging World, best modeled by BRICS-less-Russia and composed of all of the countries Africa has grown in wealth and culture maybe ten times as fast as the United States in the last two decades alone. If this trend continues I may yet be alive when the Northern Hemisphere kneels down to the South.

These remarkable thinkers grew up as their societies grew up. And the scale is astounding. So it’s as likely that India’s most accomplished physicist or South Africa’s most successful IT manufacturer were born in mud huts as that modern railways speed through Kenya’s deserts.

And of course it’s all come to pass.

So these wizards of thought now have children. Their children never questioned the dawn-to-dusk toil of collecting firewood and water at their mother’s behest. Instead, their children protest the time limits their parents place on internet usage.

Also, it’s different from our Hank the LaSalle St. venture capitalist, son of Josh the Maquoketa farmer who now has no one to help him bail hay. But, how different?

Prakash Kona is convinced that the world’s self-centered populism which has brought to power so many destructive governments, today, is because of Harry Potter:

“a generation that has made a philosophy of life out of wishful thinking; the narcissism of the young stemming from a class that can afford and choose to remain imbeciles.”

American white men should not “conform to the opinions of a group only because [they] don’t want to be left behind or are afraid of being alone – nothing is more dangerous than the inability to look at ideas from a critical distance. When people think in groups [they] are bound to have political leaders such as Donald Trump in the United States, Erdogan in Turkey and Narendra Modi in India.”

People who vote for demagogues are “un-grownups by choice.”

“It’s an understatement to say,” Kona writes, that the throngs shouting ‘Lock-Her-Up’ “are a besieged lot that cannot bear to see how firmly they are trapped in a cage of failed dreams.” Failed dreams born of Harry Potter stories?

“There is a whole generation of Harry Potters with a cosmic right to ownership who think they can become what they are not.”

The obsession with an “American Dream” hijacks normal childhood development, interrupts the growth of normal predisposition to dancing, mathematics or animal husbandry or whatever and takes youth down endless primrose paths. But worst still:

“If we could only face the truth with a bit of honesty I am convinced that the depression that comes with disappointment, thanks to the cynicism which is the logical end of wishful thinking, would not be such a big problem.”

Finally, the most egregious fault of the Harry Potter cult is their inability to handle facts. This is because fantasies don’t need memory:

“Memories exist only where there is fellow feeling. In the isolation of one’s fantasies there is no space for memories.”

Kona paints a very dismal world of intellectually depraved children well enough off to believe they deserve everything. When they grow up, they don’t. They remain un-grownups, leading the world to destruction.