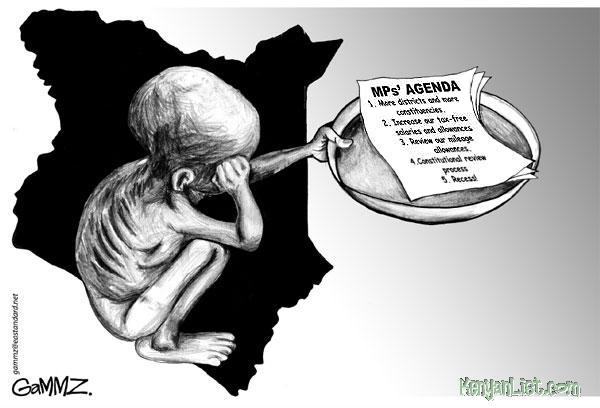 Kenya tries too hard to be western. It even started to reign in widespread corruption, trying to achieve that fine line that western countries manage between corruption and lobbying.

But the last two years have been seen the most enormous setbacks. Kenya has slipped to 143 of 180 countries ranked by clean government by Transparency International. I think I know why: You can try to be western but if you don’t know all the tricks you’ll get hoisted by your own petard.

Three days ago virtually the entire management that oversaw the building and implementation of Kenya’s proudest infrastructure achievement in its history, the new railway to Mombasa, were arrested for corruption.

The scale of their graft is unprecedented, according to the indictment. It includes 17 senior government officials and lots of other private business people.

Unfortunately these headliners seem to be celebrated by many ordinary Kenyans. I’ve seen it myself. I recently fired one of my driver/guides in Kenya who blatantly cashed in an unauthorized bar spree on a safari account.

Corruption in Africa has a long history. With traditional societies of the sort that existed in Kenya and Tanzania, the first step to corruption came with religion.

The Kingdom of God introduced by European explorers like Livingstone was a new idea: The top guy can be “infallible” like the Pope and even irrefutably and untouchably so, like God. This concept was alien to most traditional Kenyan and Tanzanian cultures.

(The most salient history of early Africa comes from powerful kingdoms in Nigeria, Ghana, Ethiopia, Uganda and Zimbabwe and South Africa. But most of Africa lacked these strong kingdoms and had much smaller political units with much less powerful rulers.)

The second step came with the colonizers who imposed a “governor” with unlimited powers over the colony. That institutionalized the idea that a single man could rule however he wished.

But the third and maybe most important step to pesky corruption came with the Cold War. Eager for African support – especially with regards to votes in the United Nations – both the East and the West lavished huge amounts of unaccountable aid on their “student” nations.

It’s tragically laughable how the Reagan and Thatcher administrations joined forces to condemn Africa for wanton corruption, when it was principally the United States and the UK that intentionally developed it to such lavish fruition.

Kenya was always the best student of the colonizers and it enjoyed the prosperity that position gave it. But it was never truly democratic, never quite able to implement that cornerstone of western theology. Kenya has had only four leaders since its Independence in 1962, including a father and son.

But the modern age and prosperity blew up that model, too, and in 2007/2008 Kenya almost went through a terrible civil war. The result was some very creative politics, including a completely new constitution, much of which is worthy of exceptional praise.

But one piece of the constitution is dead wrong: decentralization of government. This wasn’t always a precept of all western political ideology, but it is fundamental to the United States.

The problem here is that Kenya just adopted the idea, slam-bam, all at once. It created its counties (“States”) then immediately decentralized them.

There were no state economies as such or state institutions to develop a tax base, so the revenue for the counties to function had to come from the federal government. “Revenue sharing” is a rather recent historical ploy in America governance but the only solution possible in the new Kenya.

So a few elected officials and their nepotistic appointees get massive sums of unaccountable money, supposedly to run their government. Step four is how to lobby well.

American government is so ridiculous duplicitous: 70,000 registered lobbyists in Washington for 436 legislators. Pay-to-play, pay-to-get-elected is now so ingrained in America I’m not sure we’ll ever remedy it. And from afar it’s clearly corrupt. So many Kenyan officials and appointees simply did what they thought the good ole American does everyday! Turns out: it’s illegal in Kenya (as it should be in the U.S.).

There might be a good story to come out of this, too. The current president seems to be embarking on a true anti-corruption campaign, there are many good Members of Parliament ready to sweep out the miscreants, and many consider this the beginning of a new era.

But see here’s the thing. Decentralization won’t work in a new country. Frankly, I don’t think it’s going to last very long, here, in an old country. So until that major leg of the constitution is retooled, ending corruption in Kenya is going to be very difficult.