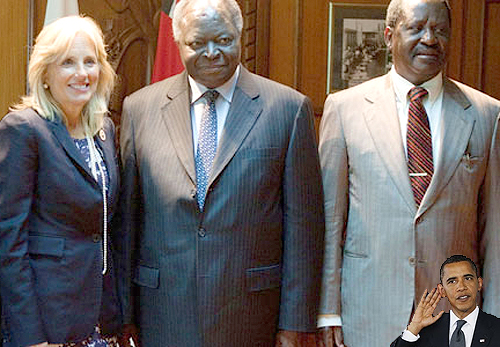 President Obama can learn something from President Kibaki. Kibaki has a plan, a bold and risky one to be sure, but one what that might solve an urgent Kenyan problem. Did you hear that, Obama? Bold. If risky, bold?! To solve a problem?

That problem is spiraling into a serious catastrophe, even as rain falls. As I’ve written many times in this blog, the famine is not mainly a result of drought, but of the increasing war in Somalia.

Today, one of the most reliable news sources for Somalia (actually based in the U.K.), Shebele News, reported that “calm returned to the Mogadishu city as almost of its districts are in the hands of Somali forces after Al shabaab fled the capital.”

While gauging the fight in Mogadishu is very difficult, I think because al-Shabaab also claimed the opposite, that we can believe the former. Al-Shabaab rarely makes any statements, and this rout of the Somali capital would be the latest in a number of setbacks for them.

Presuming this situation to be true, it definitely gives President Kibaki an opportunity to do something bold, and he has done so.

Yesterday he told Dr. Biden that Kenya would enter sovereign Somali territory to “set up feeding camps” there.

Not quite an invasion, but close. And offering to do something this radical would help to move the problem a little further away from sovereign Kenya. It would also give cover to the international aid agencies and donor countries who dare not appear to invade any new place right now.

The risk is that all of our assessments of the weakened state of al-Shabaab are incorrect. It was al-Shabaab that bombed two bars in Kampala last fall, killing nearly 80 people, in retaliation for Uganda’s support of the African forces in Mogadishu.

So this is risky. And what’s more, normally such a national policy would require Parliament to sign off on at least the funding. But Kibaki, like Obama, is not exactly on the friendliest terms with his legislature.

But Kibaki, unlike Obama, is grabbing the reins and whipping the horses into action. Nonaction is not an option. He is leading, and leading is risking, will always be challenged by those who don’t want to follow, and must often pierce sovereign territory.

Kibaki should be wildly applauded.

Perhaps, Dr. Biden can find a moment in her busy schedule when she gets back to chat with Obama.