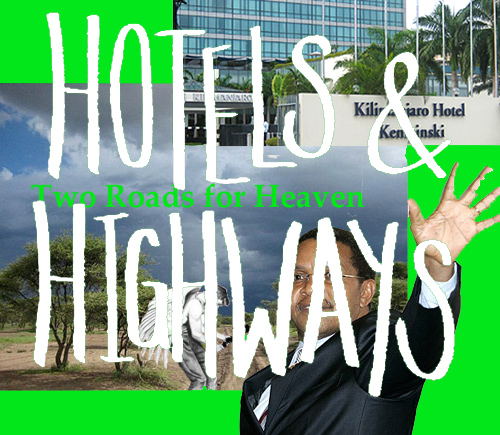 Hundreds of travelers headed to Tanzania remain in limbo this morning as a result of a high profile controversy involving one of Europe’s most prestigious hotel chains, a controversy ensnared in the Serengeti Highway debacle.

Late last month ASB Tanzania Investments, the owners of The Kilimanjaro Hotel in Dar and Bilila Lodge in the Serengeti, announced Hyatt would be taking over from Kempinski. In May they had announced Kempinski had withdrawn from managing the Zamani Resort on Zanzibar, and that hotel continued to operate with local management until this week.

But Hyatt has announced it is taking over only the Kilimanjaro hotel in Dar.

What are tourists doing when they arrive these places, now? I can’t imagine Bilila abandoned; I was there only a few months ago. It’s a palace in the wasteland, a luxury convention resort. But no one answers phones or emails.

No notification was given those who were confirmed into the properties, nor to their agents or tour operators. Reserved travelers are in limbo.

Kempinski has referred questions about deposits and nonrefundable payments to Hyatt, but Hyatt insists it is managing only The Kilimanjaro.

For the moment, I’d advise travelers to quickly book something else in this High Season if they can, and then to read the story of High Intrigue that follows.

And shame on Kempinski for leaving Tanzania in such shambles.

But I think I know why.

Kempinski has only been in Tanzania for 4 years. Bilila Lodge opened on July 9, 2009. It is widely assumed that the president of Tanzania, Jakaya Kikwete, has (or had) a sizable investment in the three properties.

He was often seen at Bilila on retreat, where one of the suites was always held in ready for him. His over-the-hill inaugural speech for the lodge far exceeded the parameters a normal politician would dane to use.

It was no coincidence that this was just about the time that the Serengeti Highway project came together.

And it wasn’t just a highway project. It was a plan for an entirely new center of the park probably financed by two billionaires, Paul Tudor-Jones of the U.S. and Roman Abramovich of Russia.

Tudor-Jones already owns the Grumeti Reserves, now managed by Singita, and Abramovich is a long-time fan of Tanzania and frequent visitor to Grumeti.

Grumeti, Bilila, and the planned new center for the Serengeti, are all remarkably close to one another, and would have been a stone’s throw from various points along the Serengeti Highway.

The Serengeti Highway has been shelved. Opposition grew and grew and UNESCO dealt a final blow, just as it had done with Zamani several years ago.

With swaggering disregard for law, Kikwete had maneuvered Kempinski into paying $10,000 for a historic site within Stone Town that Zamani was to be relocated to … at hundreds of millions of dollars. UNESCO was appalled, and warned (like it did later with the Serengeti Highway) that World Heritage status would be removed.

In the economic hay days when Kikwete wrapped Kempinski into his devilish plans, he essentially ignored UNESCO. But as tourism contracted, as his own country was shaken by controversial elections, UNESCO’s warning was not so much powerful itself, as a final conclusion to what all good folk believed world wide, including in Tanzania.

The threats to the fragile history of Zanzibar and the ecosystem of the Serengeti were paramount, but it became clear in the leaned down years following the global recession that general tourism was threatened by his schemes.

Kikwete has backed away, entirely. Some of his ministers now become the fall persons for his folly.

Kempinski finally had enough. It left. Rather quickly, actually, and not at all like a European gentleman leaving a cocktail party.

I suppose what’s most important, is that this miserable attempt to profit from Tanzania’s special environments and history, is over.

What is left, though, is for Kempinski to come clean. And to apologize not just for its misguided interests in the beginning, but for the appalling way it’s left.