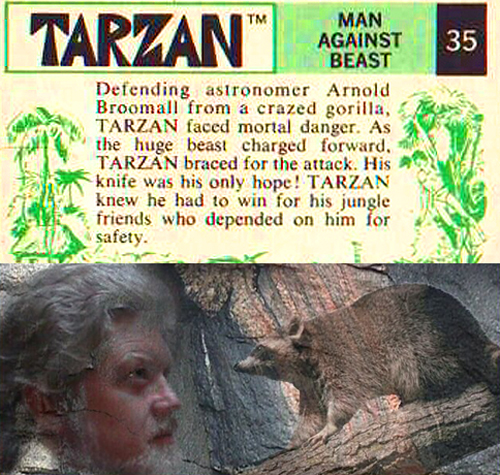 Pepper spray, moats, blow horns, flashing lights … nothing seems to work. People around the world are getting fed up with wildlife.

And it’s becoming frighteningly unclear if the benefits of tourism are greater than the disadvantages that local communities now believe they must bear to support that tourism. And which is more important: agriculture or tourism? Resource development or tourism? A relaxing Sunday walk in the park, or tourism?

And as a result the greater question of biological diversity gets subsumed in this more immediate question.

Last week officials from the Kenyan Wildlife Service held town meetings in southern Kenya to admonish citizens not to try to move ton plus buffalos themselves, while in the west of the country exploding populations of wild dogs have begun to attack farmers’ sheep.

With nearly 15% Kenya’s land wilderness reserves that protect wild animals, it’s hard to find any human area short of the megalopolis of Nairobi that isn’t effected.

But it isn’t just Africa, of course. It’s worldwide. From India to Indiana. From elephants to wolves to beavers. And what’s worse is that the conflict is becoming tinier and tinier!

Two years ago Amanda H. Gilleland of the University of South Florida (USF) completed a meticulous study documenting a growing intolerance for wildlife by the citizens of southern Florida. But not just to cougars and alligators, but to armadillos, possums, racoons, squirrels and … even frogs!

Two simple things: (1) increasing wildlife populations which have been unexpectedly even more increased by (2) global warming.

Obviously global warming threatens a few species like the polar bear, but for the vast majority of the planet’s mammalian biomass it’s actually a boon to survival. Wild animals adapt to changing weather much better than people do and warm is better than cold.

When elks move north from Isle Royale because it’s getting too hot for their food source, wolves are then left without a meal. So with the first warm breeze, wolves move towards their next easiest dinner: the nearby sheep farms of northern Wisconsin.

When excessive drought and flooding caused by global warming in the equatorial regions threatens the grass dinners of the African buffalo, the massive herds simply move into people’s backyards and irrigated farms.

And all of this is happening after decades of successful work to conserve wolves and buffalos, boosting their populations even without the help from Chinese factories.

It isn’t as if scientist haven’t been trying to do something. But conference after conference from my point of view seems to slam into the brick wall of the simple fact “there is too much.” There are more people. There are more animals. There are too many.

The host for the black bear/human conflict conference held this year in Missoula characterized his responsibility to sum up the gathering’s scientific findings as “the guy with the broom at the end of the parade, sweeping up the horse apples.”

“Bear managers in North America are victims of their own success,” he concluded.

It’s incredibly ironic that successful big game management, which the Kenya Wildlife Service inscribes as Kenya’s “posterity,” is a main source of the problem. Wild dog is the best example.

Nearly extirpated throughout Kenya ten years ago, a large scale project to vaccinate pet dogs that lived on the outskirts of wilderness areas essentially controlled distemper that had been migrating from those pets into the wild population. Now pets and wild dogs are distemper free, but sheep farmers have become quite ill tempered.

Of course a huge part of the problem would be easily solved if we solved global warming. (Oh, and by the way, that solution would create a few other benefits to humankind as well.)

But even if a sudden, miraculous consensus was found in the world to deal with global warming, it would take a lot longer to accomplish than some sheep farmers in Kiambu or Wausau are willing to tolerate.

Besides, it’s only half the problem. The other half of the problem is that animal populations are growing. In some cases like elephants it’s fair to say they’re exploding, and in almost all cases so are the human populations sitting next to them. “There is just so much flour you can put into a loaf of bread,” my grandmother used to say.

But not resolving the issue to at least some extent will create the defacto solution implicit in the USF study:

Africa may have presented us with the solution, although it’s expensive.

First accomplished in Namibia with Etosha National Park in 1973, the 500-mile 9-foot reenforced double electrified fence with moat, successfully divided big game from ranchers, and over the last 40 years both ranching and tourism have prospered.

And more recently in Kenya, the Aberdare National Park is now fenced in. The 250-mile long fence included 100,000 posts hand driven into the ground. But it cost what amounts to the average annual wage of one million Kenyans.

There’s no alternative, folks. Some places like Tanzania’s Serengeti and Botswana’s Okavango Delta may remain mostly unfenced for another generation or two, but the day is coming. If we don’t stop the war of Man Against Beast, we know who will win.