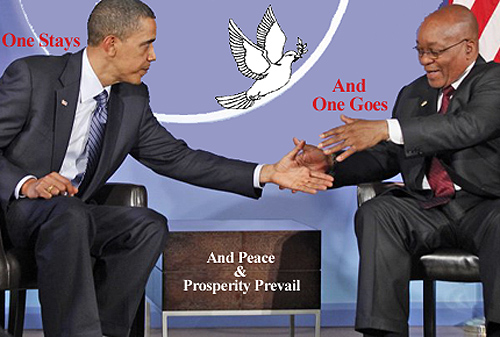 Watch out! A period of political stability is looming, and with it economic stability. From South Africa to Kenya to Egypt and across the pond to the U.S. tranquility looms large for a while, perhaps the rest of the decade.

I guess it’s the end of the Great Recession. Like a patient recovering from a near life-threatening disease, the initial feeling of weakness is actually relaxation more than a loss of a power. The juices are strong, again, and confidence is returning..

The Arab Spring has settled into what extreme progressives like myself fear is ennui and may be, but whatever it is, nothing much more is going to change from what we see this morning. And coasting along for a while isn’t such a bad notion, really.

With all the potential turbulence in the Mideast, it struck me that Egypt’s Hamas, the Muslim Brotherhood, the current regime, was one of the first to congratulate President Obama on his reelection with unnecessary gusto:

And there’s no question that if Obama’s policies in Iran don’t lead to positive movement, the errant child of Israel, the perfectly bilingual Netanhayu, could pull the trigger. But even he seemed remarkably humbled by recent events. Or maybe more correctly, the tiger’s been caged.

Whichever it is, the tension meter in the Israel/Iran war zone plummeted last week.

I think the area cooled in large part because of clever Mursi of Egypt. Mursi has all his life worked in the background and we criticized him on his democratic assumption of national political office for continuing to do so. But his messages are pretty consistent: no more war. Perhaps even heavy handed: no more protests.

Mursi is not want to restrict his ideology to The Nile. He wants peace in the whole area and he has begun to coalesce his Shia partners in a way that compliments western sanctions against Iran’s crazy Shiites. His efforts are truly masterful and little known because he prefers the shadows.

In South Africa I think the circus which has been its politics for the last decade or so is coming to an end. President Zuma’s long theater of the absurd comes under public review when the ANC convenes next month to decide if he should continue as leader.

It’s one thing to be a dancing bear, and quite another to chase the audience out of the tent. Zuma’s multiple wives (I think for PR purposes alone), his absurd pronouncements about AIDs, his annoying suits against critics and most recently, his gross mishandling of the country’s growing labor unrest has cooked his goose.

South Africa’s doing well, more so when compared to the west and less so when compared to nearer South America but sure enough that Zuma’s incredible even public graft is likely over. Watch the December conference carefully, but I think it will herald in a new, better and more stable political regime in South Africa.

And all pivots March 4 on Kenya, and I will be in Nairobi if briefly, and I expect to hear the olive thrushes not bazookas going off. It’s been a laborious often agonizing process as this remarkable country rereates itself from the devastation of its 2007 violence.

But recreated they have, and while Kenyan politics is forever unknown until the day it happens, the man in waiting to be the next President ever since his unimaginable concession five years ago of his legitimate election as President back then, will likely be Kenya’s next leader. And its first leader of the “New Era.”

New Era, indeed. In America we won’t slip off the fiscal cliff, or if we do it will be short-lived and not significant. This doesn’t mean not without drama. I heard this morning that Dancing With Stars is critically losing viewers, and my 7-1 Chicago Bears forgot last night how to play in the cold and sleet. We need drama in America, and I’m sure the fiscal cliff will step to the fore.

But some of the most radical thinkers in America before the election are remarkably sanguine if subdued right now. That means for the time being the fire’s gone. And maybe, that’s not so bad.

But when it’s all said and done, which will be in a very short time, we’ll all recognize that we were the patients who almost died but didn’t, and whose juices are now flowing stronger than ever.