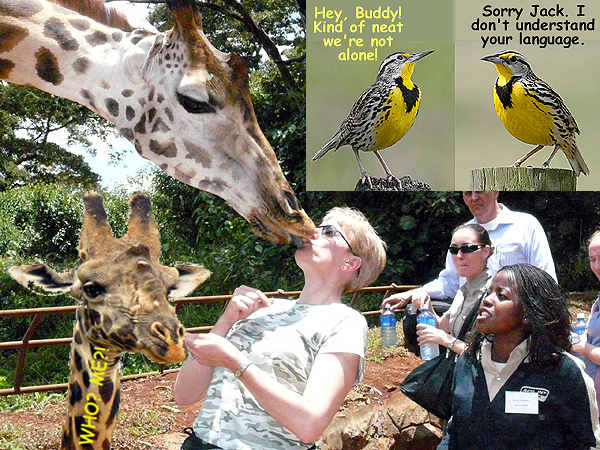 There is not just one giraffe animal. There are four giraffe animals. Open your mind. Get yourself comfortable. This is incredible news.

Using astoundingly advanced DNA typing, scientists last week announced that the tall, slender-necked animal that all of us blithely call “giraffe” may not be. Or rather, may be several times over. Let me explain.

The “giraffe” is actually four separate, completely distinct different animals, separated across Africa into what might be separate ecosystems.

This is not what field scientists thought for the last century. Yes, they bickered about whether there were 4 or 5 or 6 sub-species but never thought in their wildest dreams that these were separate species.

What does that mean? It could mean they can’t interbreed. It might mean that they eat or digest or breed or otherwise behave significantly differently from one another, but we’ve never been motivated to find out before. Because they were all … just giraffe!

There were a few known to tenaciously hold on to survival in busy West Africa and in the desert areas, and they seemed smaller. The starkly beautiful “reticulating” pattern and third horn of those that live in northern Kenya was certainly the most handsome group. The very pale patterned creature near the great Zambezi seemed like a pastel afterthought, but none of these or the other presumed subspecies looked or acted different enough to be presumed separate animals.

DNA to the rescue. There are four distinct wholly separate species.

There is the Reticulated present only in northern Kenya. There is the Tippelskirchi formerly known as the common Maasai giraffe of most of East Africa (but also includes a formerly presumed subspecies, Thornicroft, which is found in the south). The third large group is the Southern, which is mostly south of Tanzania (but remarkably includes a small once wild group in Kenya known as the Rothschild and perhaps smatterings across the continent), and the Northern which includes animals in the west and north of the continent.

So who the hell cares? Well, lion and elephant and buffalo and hippo researchers for sure. How come their animals didn’t speciated across the continent?

The trustees of the Giraffe Centre in Nairobi for sure! They’ve been getting my money for years claiming that their near extinct Rothschild giraffe had to be specially taken care of. There is no Rothschild giraffe! It’s part of the robust Southern group and and there’s lot of them!

Geologists are giddy! Could some series of great events perhaps associated with the creation of the Great Rift Valley have spatially separated these animals? They’ve apparently not associated with one another for up to 3 million years!

Ecologists are dazed! Now that borders are being articulated around these separate animals, what else is distinct within their individual environmental spheres? Could there be other animals or plants immutably linked to these unique systems?

Anthropologists are running to the caves! Recently there’s been a trend among early man researchers arguing that homo sapiens arose from southern Africa, not Eastern Africa as has been presumed for years. Well, guess what? The founding animal in this group of “giraffes” is from the south. The other three branches evolved subsequently from it. Does this lend credence to the trend about early man?

Really complex brain-teasers are going to explode into all sorts of new research specifically about the “islands” of animals separated from one another, e.g. the Rothschild.

I saw the Rothschild when it roamed the wild of central Kenya 40 years ago. It’s no longer found in the wild of Kenya but is protected in the fenced Lake Nakuru National Park in Kenya or in the popular Giraffe Centre outside Nairobi. But it turns out it’s a part of the Southern group! What happened that it became separated from its group nearly a thousand miles away? What was so different about where or how it lived in Kenya from the Reticulated, only 50 miles to the northeast, or the Tippelskirchi, only 50 miles west? Why could it not survive in Kenya’s wilds but is doing fine in South Africa?

Organic scientists of all types are near hysterical! As the study itself states, “Numerous efforts have been made to define species, but a clear-cut consensus has not yet been reached,” yet that is exactly what this study does: definitive species identification. So do they claim now to know how to call a spade a spade?

You can’t blame scientists for having gotten this wrong and seen a single animal in four. Ever since the legendary Carl Linnaeus in the mid 1700s starting classifying animals by how they looked, there’s been no good alternative.

No one at first notice knew that an eastern meadowlark is a separate species from the western meadowlark because they look identical. With time scientists learned to augment how something looked with how it sang, for instance, and when motivated by a completely different song (as with the meadow larks) further observations confirmed the two identically looking birds were separate species…

Oops. What if they aren’t? What if they just grew up with a different language (song) and that language is as important a barrier to where things live and survive?

Well, guess what? We’ll be able to tell now!