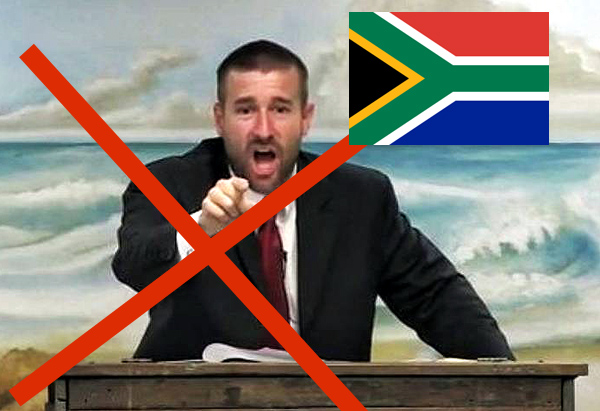 America has never lacked of snake oil salesmen, but following South Africa’s banning of Steven Anderson it’s clear that we better start realizing they might be something dangerously more than just conmen.

The Tempe, Arizona, Baptist minister decided if Barack Obama won’t cleanse South Africa of “sodomites .. drinking booze .. and terrorizing God’s people,” he will. Well, guess what: South Africans are doing what we and our ratings-greedy journalists and weak-kneaded politicians won’t: Stopping American extremism.

It wasn’t easy. After a public review of a petition signed by 60,000 South Africans to ban Anderson, the Home Affairs minister finally did so Tuesday. He also banned any member of Anderson’s church or employ having determined that the American’s only motive for visiting his country was to spread “intolerance and hate.”

The decision is controversial in South Africa, and not over whether Anderson is a good guy or a bad guy. Rather it’s because this same government banned the Dalai Lama while welcoming Omar al-Bashir, Sudan’s president who is indicted for crimes against humanity by the World Court.

Those questionable decisions certainly casts this Home Affairs’ decision to ban Anderson in other lights than morality, but be that as it may I think it’s fair to say South Africans are unified in believing that Anderson is a kook, but more importantly, a dangerous kook:

“The Bible is crystal clear that these people are an abomination, that they are filthy, vile and dangerous, violent people. The Bible says that they are worthy of death,” Anderson was quoted saying about the South African LGBT community.

“Besides, maybe instead of handing out condoms like candy, these people should be taught not to live like animals and sleep with everyone and everything that moves.”

I’ve heard people say that the rise of hate in the United States is not unique to us, but a worldwide phenomena. They point to the hurtful conservative movements in places like Austria and Australia. I disagree.

I think those movements rose out of ours.

South Africa’s very conservative and evangelical ChristianView Network lumped Anderson with Trump castigating each as “a narcissist who wants publicity.”

Throughout my career I’ve often encountered in Africa’s great cities American preachers holding what I called revivals. That’s what our ministers called them when I grew up in Arkansas.

They were amusing until my blood started to boil when they passed the hat around a group of already very poor people. But their pitch was never contemporaneously offensive. They didn’t attack public figures. They didn’t disparage whole groups of people with defamatory language. Basically they stayed on message that Jesus Saves.

I always felt they were scum, because they were making their living extracting pennies from the penniless. But they weren’t publicly offensive.

That’s changed big time. It started with the neoconservatives at the turn of the millennia as K Street recruited armies of young people as well as U.S. Senators to invade places like Uganda with specific political agendas, most often to criminalize homosexuality.

This blog’s copious writings about what happened in Uganda has made it problematic that I can return there.

Steven Anderson is not unusual in America, today. He’s young, well-financed and protected by a growing coterie of supporters back home. Even after he celebrated the Orlando massacre in a sermon, joyfully reminding his parisioners that at least “There’s 50 Less Pedophiles in This World,” his support actually increased.

Africa and much of the rest of the world are beginning to react seriously to these people. We should, too.