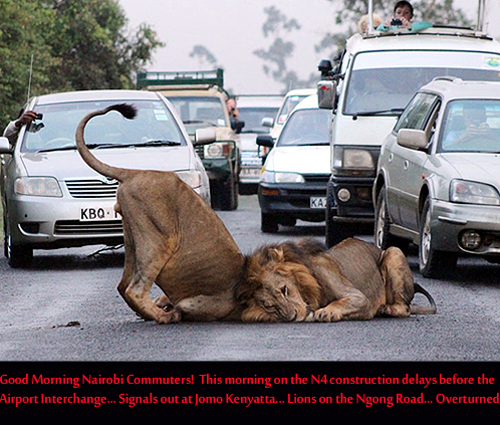 The great King of Beasts might soon be something less. It’s not just the statistical decline. It’s losing its glamor. It’s important that we outsiders don’t force this issue. Africans are handling it just fine.

But you’d never guess which Africans.

Lions like most headliner animals in Africa are in significant decline. The fact is hidden to foreigners who experience two to three times the numbers of wild animals in the protected areas they visit compared to a couple decades ago.

And that’s actually part of the problem. The national parks and reserves, refuge for wild animals under siege, are too small to handle all the immigrants.

When these areas became popular with tourists, field scientists began to study them. It’s from these types of areas in particular that we can corroborate the serious decline in the big headliner animals. Lions and elephants show the greatest decline among these.

Elephants’ decline can be attributed to how valuable its tusk are on the black market. Lions’ decline is because they are menacing to the growing development around them. Believe it or not these are not radically different reasons. Both animals are declining in great part, because both animals are being intentionally killed.

There are, of course, less onerous reasons like simple habitat erosion from climate change. There are complicated reasons, too, like viruses that might be linked to development in some way. But clearly, assassination is if not the single most important reason, one of the very most important.

The Washington Post recently had a wonderful article about the lions of Nairobi National Park and their constant conflict with Nairobi’s growing population.

All sorts of local efforts have been made to protect the lions in Nairobi’s iconic national park, an absolutely astounding 45 sq. miles of savannah surrounded by some of the most rapid, noisy, dirty development on earth. The park is fenced on three sides and open to undeveloped land on its southwest.

One of Africa’s biggest cement factories encroaches on its river border. Eight lanes of highway traffic roar out of a new, giant international airport on its side. A new 21st century elevated train is going to run through its edge!

And 40-45 lions live there totally wild. As you might guess, they’re having trouble.

Sometimes the electrified fence fails. On the other side of one part of the fence are cows and goats and sheep and all sorts of peaceful animals waiting to be eaten. On another side increasingly habituated lion get hit by cars on Nairobi’s busy Ngong Road.

The lions two hundred miles north in Kenya’s wild Laikipia are actually having a better year than the warring tribes here that raid each other’s cattle. This is because the Ewaso Lions Project is almost entirely powered by local Africans who are its active employees and advocates.

This is a mad reversal of what you’d expect. Nairobi is filled with educated, youthful and ambitious people who at least claim to understand the importance of conservation and biodiversity. Moreover they know better than any the revenues that tourism can bring.

In the remote Great Northern Frontier of Laikipia education is lacking and traditional lifestyles linger. Lions were never liked in these ancient cultures. Western anthropologists’ wild claims that the cultures “tolerated” lions is nonsense. They were killed as often as they could be.

Now the people there are beginning to recognize in their own heritage the importance of lions. The more educated among them are raising the funds to compensate farmers who suffer loses to wild animals, because the government law that is supposed to do this is never sufficiently funded by Nairobi.

Above all it’s important that we outsiders don’t force any agenda. How Kenya, for example, decides to save its lions is up to Kenya. We can let them know what we think. We can offer funds and support but we should never withhold funds and support. The post colonial era has proved that doesn’t work.

I’m pretty optimistic. If a red-robed herdsboy in the deserts of Borana is now reluctant to kill a lion that killed one of his goats, I think the Armani-suited driver on Ngong road will buy a little bit more insurance to cover a lion dent on his Benz.