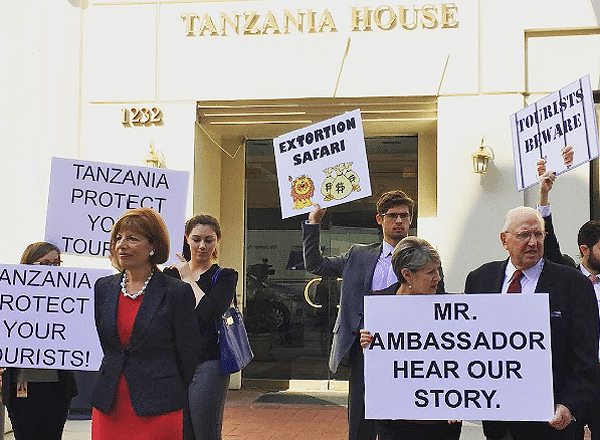 Tanzanian tourism is crashing following the country’s refusal to apologize for wrongly jailing an elderly California couple on trumped-up charges of giraffe poaching.

Thousands of dollars in bribes went to jailors, judges and other officials before Jon and Linda Grant were released from three days in a horrific Dar-es-Salaam lockup last March. Thursday, U.S. Rep. Jackie Speier took the couple to Washington “to clear things up,” but Tanzanian officials barred them from entering the embassy.

Tanzanians have a very short time to get this right before suffering enormous losses economically and diplomatically. The details of this incident are going viral.

I’ve spent much of my life bribing lowly African officials and equally defending Africa against exaggerated claims of bribing. The bribes that hurt a country are the illegal backroom deals that fleece the pockets of politicians.

Bribing a customs official is wrong, but it is no more or less wrong than when I folded a $5 bill under my driver’s license before handing it to a cop in Chicago.

But my long time efforts to make this distinction and to assure the world that Tanzanian customs officials will one day come round just as Chicago cops have, seems to be all undone by the events surrounding Jon and Linda Grant of Culver City, California.

The elderly couple are dedicated safari veterans who have delivered many wheelchairs to Africa on behalf of Rotary International. In March they combined a safari in South Africa with Tanzania. All went well until the very end when they moved through security to their departing flight from Dar-es-Salaam.

The couple had ignored advice that we experts routinely give to never purchase any type of animal product whatever. Many travelers bristle at this notion, because in fact many animal products are legal to purchase, like the carved giraffe bone that the Grants picked up in South Africa as a souvenir.

“I’m convinced that they ID’d them as Americans that might have a few dollars and they were going to take them to the cleaner,” Rep. Speier believes.

And so they did. Discovering the old, beautifully carved bone, a lowly customs official pulled the Grants out of the security line.

I don’t know what then happened at that specific moment of confronting the lowly official. Were it me or one of my clients, I would have pulled out a couple 10,000 Tanzanian shilling notes and asked for understanding, and I can’t imagine not receiving it. But whatever did happen, the next part of the story we know is that Jon and Linda were in jail.

They were separated before being put behind bars. Their documents and identification were taken from them including Grant’s medicine. He suffers from severe arthritis.

“I don’t even think I have the appropriate words to describe the fear,” Linda Grant recalls.

Jon claims he was initially denied any ability to defend himself or make a phone call. The local safari company (that wishes to remain anonymous) got things moving a little, and by the second day Jon made his California phone call.

As Rep. Speier grew involved, the local Dar safari company produced increasingly larger bribes and was able to get Jon to appear before a judge, quite an extra-legal process if that matters.

“The whole system is just as corrupt as can be,” Jon Grant says. “Every person gets paid.”

And so they did.

In the end more than $60,000 went to a pitifully corrupt customs official, to an underpaid Dar police officer, to a corruptible regional judge, perhaps up to a very poorly trained U.S. Ambassador in Washington.

But the worst was yet to come.

After refusing the Thursday meeting in Washington, Tanzanian officials back home doubled-down on the nonsense that a 72-year old arthritic retired philanthropic dentist killed a giraffe, cured its bone to look years old, then masterfully carved it … all on a 5-day Serengeti safari:

“How did anyone … believe that the item actually originated from another country?” Minda Kasiga of the Minsitry of Foreign Affairs in Dar said in a statement over the weekend. (I’ve taken a snapshot of this statement should the link be removed.)

Masiga went on: “…anyone found with government trophies without proper explanation will definitely find themselves in trouble.”

Is this what Tanzania really wants the world to hear?