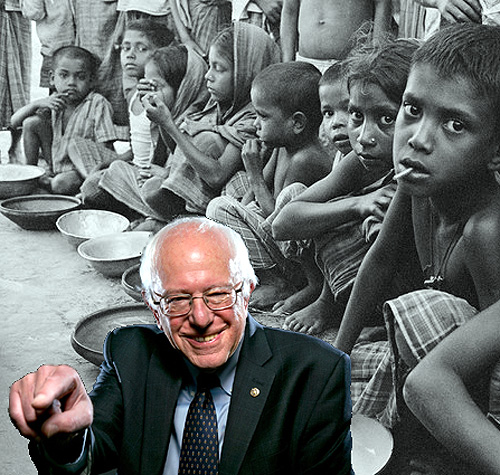 An American/South African has turned Bernie Sanders on his head, revealing a gaping contradiction in the ethos of this growingly popular progressive.

I like Bernie. I like him more than Hillary and probably more than Joe and my ideal presidential contest is Trump vs Sanders.

But an American turned at least resident South African has stayed my Sanders’ enthusiasm as nothing else I’ve read.

J. Brooks Spector was an American diplomat some years ago when he decided to leave America and take up residence in South Africa. He set up some businesses in the country, taught at a major university, ran a theater and is seen on South African TV interpreting the world from a former American’s eyes.

Commenting today on the drowning of the Syrian refugee child Alyan Kurdi, he writes:

“…nobody can point to any acts by an outside power that have set off these recent waves of migration, other than the US being an economy that is growing in contrast to so many others…”

For decades I’ve felt oppressed by my own beliefs, which often raise slight smiles and dismissive stares from my clients who are always much wealthier than I am. My safaris get wonderful reviews but if I lose a client it’s often, as one wrote me, “when you talk politics. Safari guiding has nothing to do with politics.”

As ridiculously incorrect as that remark is it typifies the state of American Progressivism for the last 40 years.

There really are people out there – lots of people like me – fed up with life’s stagnations. The status quo has a remarkable ability to squelch dissent. But you can put up with something being downright unfair for just so long.

It would be one thing if America weren’t growing, but as Spector points out, America versus the rest of the world is growing quite well. But … as Bernie so eloquently explains: not for the 98% and I and likely most of you reading this are in the 98%.

Moreover, we more stable of the 98% are very sensitive to those who are sinking … like some of our kids or friends’ kids, or important parts of our communities that we’ve been so deeply involved with for years.

Bernie wants to change that. He wants to level the playing field, right? He wants to spread out the largess, taking some of the unfair success of the few and reapportioning it to the many.

I like that. After all it is the many which provide the few with their growth at the expense of not growing themselves.

Although Spector was referring to migration, what if we expand his notion to all the world’s problems?

Then immediately we have some serious problems with Bernie’s views on trade: If farm subsidies should be reduced in the U.S., shouldn’t tariffs worldwide be reduced, or dare I say it, Free Trade? His initially welcome views on foreign intervention – “Don’t!” – become questionable: if the federal government must audit individual police departments, what about Assad?

Or let’s talk about AID. If we subsidize rebuilding I-90, what about the Suez Canal or the great new Ethiopian dam?

And so it goes. If Bernie’s hyper focus on putting our own house in order results in a fairer, bigger house for all here at home, will it be at the expense of the rest of the world growing less?

“At present, however, the prevailing international order still means that individual nations will decide what is best for them to do… within the realm of their [own] national politics. Don’t expect the impact of [Alyun Kurdi’s] death to trump individual conceptions of national interest.”

Or, for that matter, the implosion of Burundi or the rape of capitalism by Chinese moguls.

It is a pernicious contradiction increasingly evident the smaller you conceive your world.