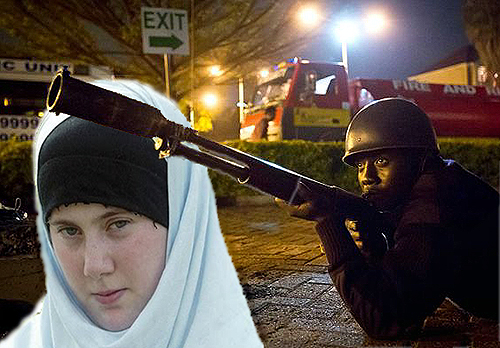 This horrible week is ending. Finally, whiffs of smoke have stopped coming out of the Westgate Mall. But some facts must be tidied up before we surpass the media’s modicum of attention.

Technically, the White Widow is not yet implicated, but I believe she is. Britain’s arrest warrant for her yesterday is the clue. Conceivably she was not there as reported by several witnesses, as she is devious enough to have ordered one of her henchmen to masquerade her. But I for one believe she was the mastermind.

Given the secrecy of the investigation it will be a long time before we have hard evidence of who led the attack. But enough has already leaked out to seriously suggest westerners from the U.S. and Britain were involved, if not leading the effort.

Just as the attackers were likely from around the world, so were the victims. This morning 33 of the victims have been identified, including 3 Canadians, a famous Ghanian author, 2 Indians, a physician from Peru, a South Korean woman who had recently moved from Dubai, 3 Australians, a tourist from China, 2 tourists from France, a man from Trinidad & Tobago and 3 South Africans.

As happens with so many tragic events in Africa, this is a global story as much if not more than an African one. Its causes, strategies and ultimately its implications are pointedly universal in nature. Thinking of this as a Kenyan or African “problem” is intellectually juvenile.

Al-Shabaab is not resurgent. It drives me nuts the way American media and politicians believe this is some clarion call to urgency that rabid Muslims are again on the crusade. Rather, it looks to me like a dying gasp of an organization in great disarray that has received a spark from wayward westerners. But that’s far too complicated a story for a 4-minute segment on the evening news.

The subsequent attack in Wajir was not unusual, I’m terribly sad to say.

Fox News was not the only one to grossly exaggerate this event and irresponsibly tie it to Westgate. More than 70 people have already been killed this year in this troubled border region of Somalia where fighting has gone on more or less nonstop since 1993.

Life will return to normal in Nairobi and Kenya much faster than it did in New York and the U.S. after 9/11, and not because 9/11 was so much larger an event. Remember that Kenya suffered 3 to 4 times as many people killed and injured in the 1998 bombing of the American embassy as it did last weekend.

But last weekend truly had a greater impact on Kenya than 1998 and I think it equal to 9/11’s attack on America. The country is far more educated, interconnected, cosmopolitan and developed than in 1998. There is a greater shock because the attack interrupted a life routine that is so much more complex and modern than in 1998.

Life will return to normal more quickly, because that’s the African way. As I said in yesterday’s blog, that’s why ultimately terrorism as we know it today will be defeated by the African’s remarkable compassion and forgiveness.

“Forgiving is not forgetting; it’s actually remembering–remembering and not using your right to hit back,” Desmond Tutu said.

A long journey to break the endless cycle of violence.