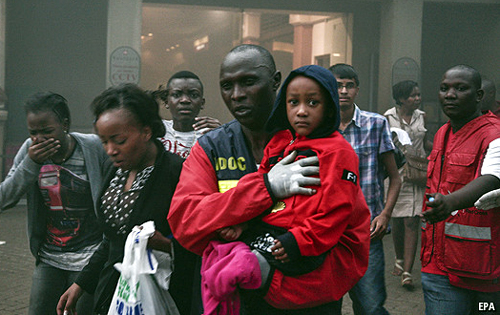 The wound is still raw. Healing has hardly begun. But one of the most powerful and critical lessons ever for America to embrace is being taught right now: Mwalimu Kenya.

Al-Qaeda “won its war against America,” Kenya’s famous writer Obbo said today. But in Kenya in stark contrast al-Qaeda has released “the compassionate side of the nation” and by so doing, has already lost its battle.

How simply true. Please follow the link above and read Obbo’s column that appeared today in Kenya’s main newspaper.

Obbo meticulously details the aftermath of 9/11, carefully enumerating deaths and money spent on our retaliation in Iraq and Afghanistan, but also reminding us of equally vindictive actions that ultimately backfire:

“Thousands of students could no longer get into America. Many ended up in Canada, whose universities now have an edge over America’s in scientific research.”

He joins the large global body of scholars and analysts who refer to the years since 9/11 as “America’s imperial overstretch.”

The sadness/grief that I’ve been walking around with since the weekend has a pretty simple explanation and is, of course, nowhere near as great as Nairobi residents. We can’t find some people, and that’s the current breathless fear that they are among those lost.

But there is a unique character to this sadness that is uniquely African, something I’ve been trying to understand all my life. We in the west often call it fatalism and sometimes with even greater denigration, nihilism.

It’s neither. It’s what Obbo understands as compassion. It’s counterintuitive to us in the west to link compassion with sadness, but how simply true! If you are truly empathetic to suffering you can’t help but be saddened by it.

That’s the African way. And it’s the excruciatingly depressing reason that slavery flourished there, that colonialism raped its lands, that the Cold War treated states as puppets, that western pharmaceuticals considered it hardly more than a mad scientist’s lab.

And that now it is destined to take the brunt of the War on Terror. And take it, it will, and by so doing, it will defeat terror, just like Obbo says.

The west is already revving up its war cries. There’s nothing our hell-bent right would like better than another war.

And that, as Obbo so beautifully points out, is exactly what the terrorists want. If you invoke the Israeli mantra of an eye-for-an-eye, you lose, they win.

Obama should read Obbo. There are as many fatalities and injuries from the “collateral” damage of a few drones attacks as in the single attack on Westgate. This back-and-forth retribution will never end. America will never get weaker. The terrorists will never be eliminated. It is an endless cycle of violence.

So do you just turn the other cheek?

Yes, sort of. Security will improve in Kenya, now. The west who started the wars on terror will perforce be more involved and that will, in fact, likely better protect at least urban Kenyans.

But it’s going to be a long, hard slug for Kenya, a miserable journey that in fact started several years ago. Although the scale of the many smaller attacks throughout the country was not as dramatic as Westgate, there have been many of them. As in Nigeria, and Pakistan, and of course now Iraq and Afghanistan, a week hardly passes without some kind of terror attack.

Obbo’s right that in the end compassion prevails over terror. There is no other civilized alternative.

But it’s also time to get real, folks. This isn’t the 17th century. Nairobi is no further from Chicago using a cell phone than your neighbor down the street.

Kenya is far less capable of uplifting the world than America: of building not just bridges over rivers but between countries. It’s time that we tone it down, realize our global responsibilities and do so with the type of unqualified compassion that Africa has miraculously sustained through the entire modern era, a period of history where Africa is never more than a victim.