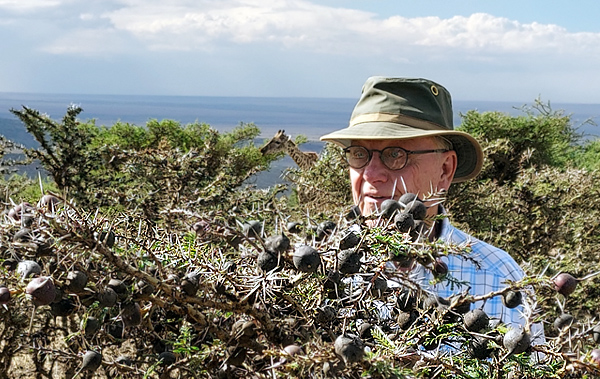 We left Ndutu after seeing another cheetah with three cubs, not sure exactly how we would go. Our destination was a lovely camp on the north end of the crater but the way you would go depends upon the dust.

The ride didn’t start out very propitiously. Although some rain had fallen the length of the dry season and its tons of dust were going to take a lot more than a few sprinkles to settle things down. Although the game viewing had been good around the lakes, as we left the area eastbound it looked like a desert trip, again.

Sissy was still laughing about her wonder at having seen a (male) ostrich on a nest with 18 eggs. She didn’t know which was more comic, the gender or the accomplishment! In fact multiple ostrich lay all their eggs in one nest and both the male and female incubate them!

So I was pretty sure we would just stay on the main road to Olduvai. Nevertheless we stopped when we hit the main road, pulled out our binocs, stood on the vehicles and peered into the wonders of the Lemuta Plains.

From the main road elevated very little from the flat earth you can see about 20 miles to the Loliondo and Vulturine Hills and with no haze, even the Lemuta Kopjes. And remarkably, when the dust of our vehicles settled, there was no haze.

It’s absolutely amazing to see this extraordinary transition from dry to wet seasons. Storms in the equator rarely move. They simply form and dump. So it looked like to me enough storms had formed and dumped further east than we had at Ndutu.

Steve was particularly delighted. His memories of his past five East African safaris are highlighted by the Lemuta Plains, but of course in the wet season when literally hundreds of thousands of antelope pepper a beautiful green earth.

But the sculpture of the kopjes never changes, and the rolling earth gives such articulation to the landscape that I really don’t think there’s anything like anywhere else. So off we went.

It doesn’t take long before you’ve left all little bits of civilization behind. At first there are tracks, but then they disappear and all that’s left are the animal tracks cut by migrating wildebeest for the last multiple decades.

The earth is bare and flat, so we could drive pretty fast. Holes were easily seen. It was very much like four-wheeling over the high buttes of Montana or Colorado. Well, except for the many Thomson’s Gazelle, ostrich, jackal and occasional hyaena.

The hyaena were hanging around the still dry depressions on the plains that would become ponds as soon as the rains gathered steam. There they wait for the many animals that have to drink.

I have encountered Maasai herders often when doing this trip, and Friday was no exception. We saw at least a half dozen groups, spoke to a couple and gave water to as many as we could. Gherry delivered a bottle of water to a mother who had constructed a boma on the kopjes below the one on which we had set morning tea.

This tiny chapter in the story of the Maasai needs much more elaboration, but for the short time we sat on our kopjes near Lemuta the basic impression was of pastoral peace even in a time of great stress. A six-month dry season is a challenge to any rancher.

We saw so many groups because they were moving their herds closer to Olduvai. I couldn’t understand exactly why until we got into the crater Saturday morning.

Olduvai does have a bit more water than Lemuta, but certainly no more fodder, and it’s food over water that the stock needs. What we discovered the next morning as we photographed good numbers of the wilde/zebra migration in the crater, was that they were coming from just around Olduvai. Once again, a storm cell there had brought out the grass.

We had a race-through experience at the mysterious Shifting Sands and then Olduvai Gorge. The conservator and I greeted each other warmly, but he pulled me aside to say our little group was the first non-Tanzanian group to visit the gorge in a year. I think one of the reasons might be the national park expense. It’s one of the most expensive national park sites to visit.

We left Olduvai and climbed the crater. The vegetation got greener and we stopped near the top so that Tony (Dr. Anton Endress, botanist extrodinaire) could examine the symbiotic relationship of certain ants with the whistling thorn tree.

With a giraffe at his back the cycle of saving the tiniest of the acacia from being eaten to extinction by the giraffe was so beautifully obvious!

Giraffe eat all sorts of different acacias, and each acacia has a different defense against being eaten out of existence. I’m sure you’ve seen the iconic flat-topped acacia (umbrella tree, acacia tortilis). The floor of its branches are roughly the height of a giraffe. They can’t reach further!

But the tiny whistling thorn rarely grows more than five feet high. A giraffe can be 14 feet high. So in the battle of natural selection the whistling thorn grew thorns quite out-sized for its overall bulk. Then the giraffe developed an esophagus that could swallow them! What to do?

Build a little hollow home for stinging ants. When the giraffe’s tongue disturbs the bulbul on the branch the ants come out in force. We saw dozens appear instantly with the abdomens up ready to sting a tongue. Unfortunately, they also stung Charlie. And when the cold wind of a rainy season blows up the crater sides where these trees are, a huge mountain whistles!