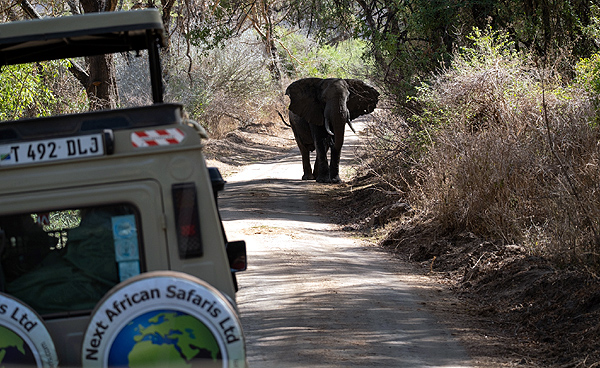 There are so many difficulties with protecting African wilderness but the biggest single one is elephants. Sunday gave me a surprising new insight.

Crushed into a smaller and smaller habitat between the sheering cliffs of the Great Rift Valley and the increasing girth of Lake Manyara, I expected the few remaining overly docile ele of the national park to be of little interest. How wrong I was!

We encountered a wonderful single family of elephants tucked into the side of the forest. The matriarch was in full musth, a sexual response to being in estrus which manifests itself as secretion of a gooey substance that streams down the ele’s cheeks.

We can’t smell it, but elephant can smell it for miles. The point of it is to let males in the area know they are welcome – however, temporarily – into the family unit. Normally no males older than about 10-12 years old are allowed into the closed-knit family of sisters, cousins, mothers and the matriarch.

In other places in Africa where the ele population is so large, the musth response has been screwed up royally. Either families don’t go into musth or are in musth all the time as multiple families crowd together.

So after watching the family for a while, we continued through the forest and wham! a big male trumpeted at us as we rounded the corner. He obviously thought we were in competition. He was in musth, showing that he was responding to the family call.

After we snuck out of the encounter we moved a little bit down the track and wham! another big male simply stood in the middle of the track, holding his ears open at us – stage one of three in the attack mode of most ele.

What to do. What to do? The forest was thick. It wasn’t going to be easy to go around off the track as we did with the first guy. This guy was larger, maybe 4½ tons. He’d flip our rover like a stick in the ground. So… we waited.

Reid Endress was in the car behind us and took the picture I’ve posted with this blog.

Finally he pulled his ears back. Maybe he realized we weren’t after the family. Maybe he didn’t get sounds from us as he had been receiving from the other male. So I told Joyful to slowly, carefully and as quite as our old cruiser would allow, move towards him.

It worked. He moved off the road, and we went on our way.

The entire northern half of Lake Manyara National Park is now little more than a plant sanctuary. Climate change is doing its thing. A simplistic explanation is that the glaciers that EWT can no longer find in Alaska are now melted into the growing lakes of the Great Rift Valley. Even as this year’s worrisome dry season doesn’t seem to completely break, the lake rises and rises and rises.

The lake is so large that all the hippo pools are gone. The beautiful bird rookeries of the white stork, yellow-billed stork and pelican are gone, because the birds’ food sources have been so dispersed and disrupted. The last great stands of yellow-barked acacia are now brown dead sticks swaying in the waves which the lake never had before. There are no zebra or wildebeest or warthog because the savannah that used to extend from the forest edge to the lakeshore is under water.

The increasingly narrow belt of magnificent high forest of mahogany, pillar, fig and other wonderful trees is all that’s left as an animal habitat. So giraffe survive and buffalo squeeze in, and there are elephants. There have always been elephants in Manyara.

Few visitors have the time or interest to explore the southern end of Lake Manyara. The road isn’t as good and there is only one lodge at the far end. I’ve been doing so for years as we developed a new way to get to the next national park, Tarangire, through Manyara’s southern end. So I’ve been taking my groups here for years and it’s wonderful. Quite apart from the situation with the wildlife, the lake and rising cliffs are even more beautiful than in the north, this is usually where the concentration of flamingoes is found, and there are so few other cars you really begin to understand what undisturbed wilderness can be.

So we explored almost every track that wasn’t under water, which weren’t many. But down there were some magnificent ele, many with remarkably long tusks. And as I described above, with traditional families.

Now I’m sure each and everyone of the ele we encountered had seen tourists hundreds of times; they were used to them. They were habituated. They led to my derogatory remark that they were “overly habituated.”

But true or not it also seems that they have retained traditional elephant behavior a lot better than the mobs of eles now found in Tarangire or Botswana. Maybe habituation to observers reduced stress. There are far fewer ele in Manyara now than there used to be, and I’m not sure why. But that, too, must have contributed to this more “natural” behavior.

So alas, based on this one single non-scientific experience, the traditional elephant behavior that I so often tell my groups has disappeared because of habitat erosion and an exploding population, seems to be present not in the unvisited wildernesses, but in a place like Manyara that has more visitors per square mile per day than any other big national park in Africa.