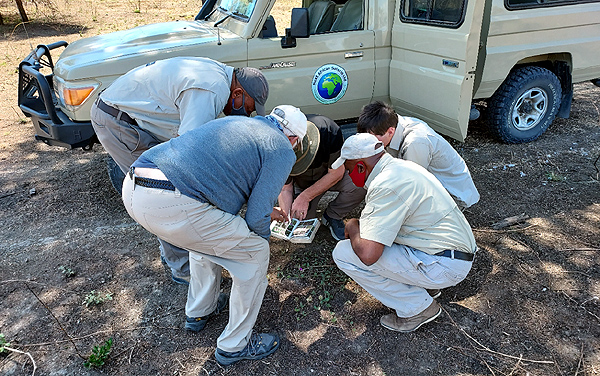 We’d had an 8-hour morning game drive, followed by a wonderful lunch al fresco and everyone was enjoying the afternoon in their tents or in the tree house overlooking hundreds of miles of the western Serengeti. When the storm came.

The reputation of the start of the November rains will never be actually achieved, but for sure our experience in both the eastern and western Serengeti explains it. After thunder and lightning like you’d never imagine, the water came down like a river falling from the sky.

The veld is so dry that it’s going to take multiple of these – which will come – before the earth really greens up but it’s hard to imagine that the ferociousness we experienced bodes anything but a wonderfully green season.

So the next morning we left the central Serengeti and headed south. It was like night and day. It was so dry that you couldn’t keep enough chapstick on your lips. We saw plenty of animals right around Naabi Hill so I took the group on the short climb to the top and we spun our binoculars all around, searching 50-60 miles in every direction and all we could see was empty desert.

For the next hour we skidded over dust and flat, dried earth. It was getting hotter and hotter and the mirages were growing and dancing all over the place. It comes as a real surprise when you approach the Ndutu Forest, the mirages disappear and actually woodlands seem relatively healthy. Their base is all dust, but the acacia actually bloom just before the rains, so the beautiful little yellow and white flowers met us like a bouquet at a boutique hotel.

But not long into the forest and the dust devils grew fierce. We’d been watching quite a few in the distance, but one appeared hardly 50 meters down the track from us, wider than the whole track, whipping dead leaves and dust into something that looked like a flexible long gourd reaching into the sky.

Sissy had the presence of mind to take a picture. The rest of us were hiding below the seats! Fortunately it dissipated before reaching us.

We had lunch and went out on a completely pointless game drive. We saw one bat-eared fox and two Grant’s Gazelle and hardly any birds. But as we neared the lodge at the end of the drive, raindrops fell. There was a scattering of them on the windshield of the rover. When we got out and looked at the cloud, we were at its very edge. Perhaps it was unloading somewhere nearby.

Sure enough at dawn the next morning we saw a completely transformed veld. I swear there were fewer than 100 drops of rain where we had been the afternoon before, and no lightning or thunder, just a rather nondescript cloud in front of the sunset.

But there was a patina of green everywhere. We saw a half dozen amaryllis plants piercing through the caked earth. Knobs of new bush growth were everywhere. My car of three scientists stopped the whole game drive to examine a beautiful very tiny little wildflower that had just popped into existence.

Now a few drops of rain absolutely can change things dramatically but I think it must have rained much harder very nearby to where we had been the day before.

I spotted a whorl of what turned out to be hundreds if not thousands of barn swallows just arriving on their fall migration. We came across a dead tree filled with four different species of dove, and no other kind of bird! At the Big Marsh swamp we puzzled over three what seemed like laggard buzzard juveniles that on closer inspection turned out to be the first of the Eurasian Harriers to have arrived! Normally solitary and constantly flying, they were exhausted from their long migration.

We watched a young python try to attack a phalarope. Oh, and by the way, we saw a total of 15 lions, one magnificent male cheetah and our 11th leopard!

Suddenly there were small groups of hartebeest, and more collections of gazelle. In a single game drive we counted six separate steinbok.

Now did all this night-and-day difference from our first to second game drive occur because the rains arrived? I don’t know. But as I’m typing this it’s pouring, and everyone is pleased as puddin pie!