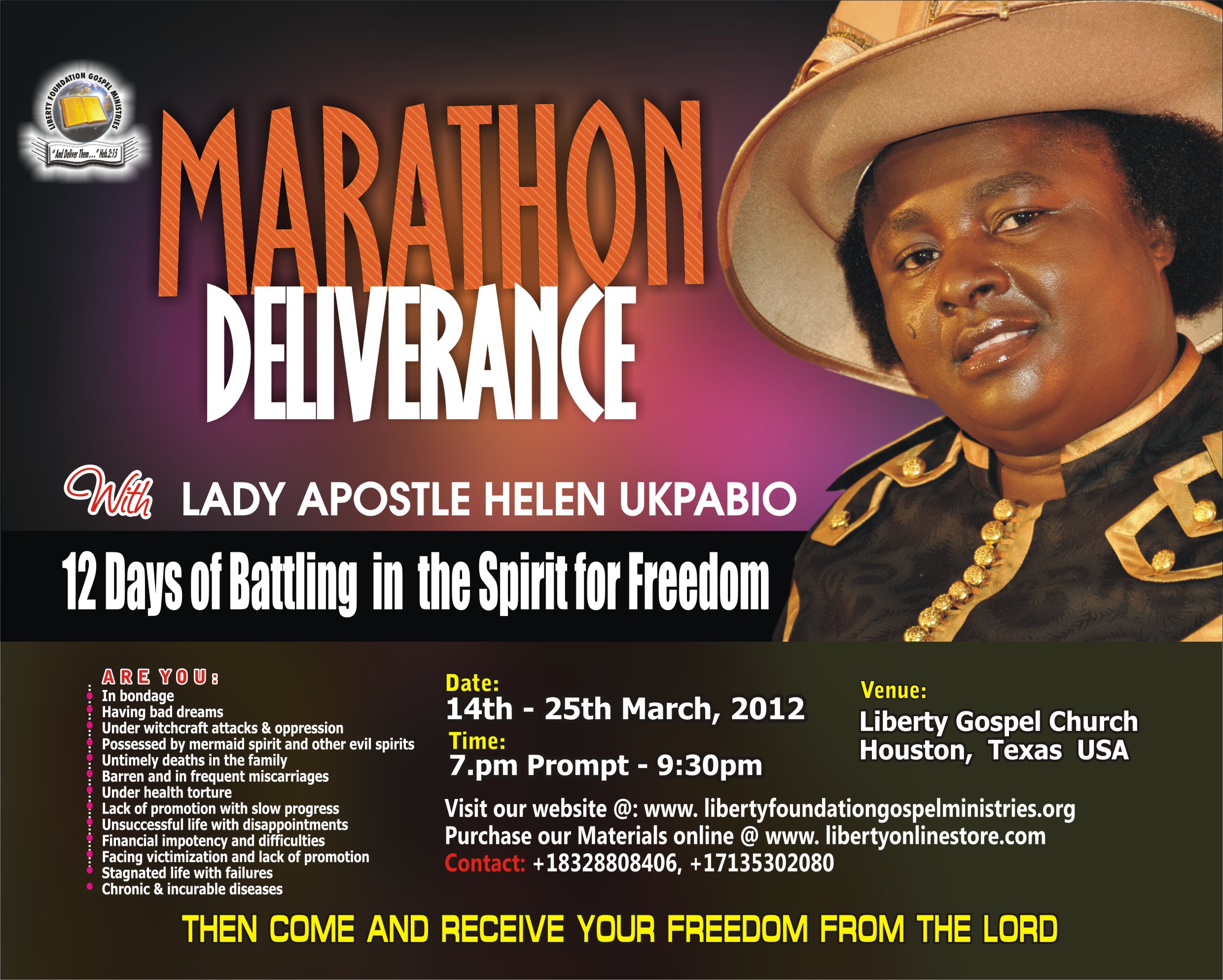 A Nigerian witch is coming to America to save us! Not sure she’ll make it in time for the conservative bigwig meeting this weekend in Texas, but that’s where she’s headed!

Yesterday, 14 people were rounded up outside Durban, South Africa, and charged with cold blooded murder of a 60-year grandmother who the gang claimed was a witch.

Witch-cleansing has not yet come to America. We’re still in the witch advocacy stage, and like so often American subintellectual naivete will likely be subsumed violently in witchy acts before we loosen gun control laws further so we can eliminate the yet-to-be determined vermin.

How liberally sarcastic, Jim! Alright, alright, cut off the vigilantism at the pass, and bring on Helen!

Nigeria’s notorious witch hunter, Helen Ukpabio, is coming to Houston’s Liberty Gospel Church. A call has gone out far and wide to us afflicted to join “Lady Apostle” Helen in March. In order to attend her assembly we must own up to suffering from one or more of:

… or if you’re doing OK healthwise, you can also qualify as a sufferer of:
– bondage
– bad dreams

… or ok, you’re healthy, not abused, sleep like a kitty and have a secure job, but maybe you just blow that paycheck every Friday, you suffer from:
– financial impotency and difficulties

No? You actually save a bit of your paycheck. Praise the Lord! Well, undoubtedly you might still in your heart of heart suffer from:
– stagnated life with failures, or an
– unsuccessful life with disappointments

All the above are caused by “witches, mermaids or other evil spirits.”

And Helen has come to exorcize them from us! Hallelujah!

All levity aside, Helen is a monster. Her church in Nigeria has through bribery or who knows what (certainly nothing supernatural) been able to cause mayhem in less educated communities, has kidnapped children deemed being “witched” by parents, and yet has been exonerated by Nigerian magistrates. The account of this victim is heart-breaking.

My point is that something as bizarre as this finds a place anywhere there is sustained suffering when victims reach their wit’s ends. And as many of the suffering credentials Helen purports above show, it’s almost always economic suffering.

Yes there are many situations of witchcraft in Africa, but also in Appalachia and close to where I grew up in the Ozarks. Anywhere where hard work and earnest direction leads nowhere.

And it’s very enlightening to realize that Helen’s outreach has reached Texas. That place where so many jobs were created under Governor Oops.

It might be fun to poke at Helen, but it’s time to get rid of her. And not by some hocus pocos, but simple social compassion. Like, maybe, more stimulus? Jobs bill? I better stop. I feel that mermaid spirit creeping in.