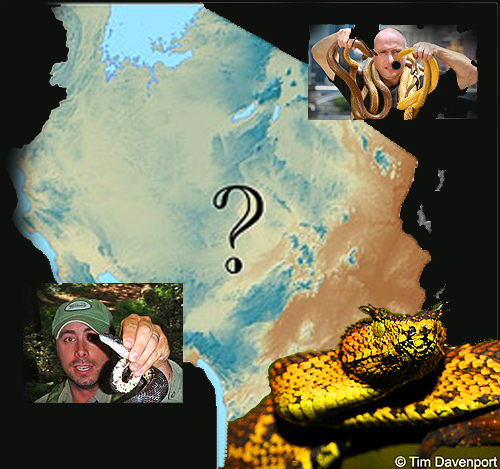 A great scientific discovery in Tanzania made two years ago, announced yesterday, remains cloaked in secrecy because Americans are likely to kill it!

The Wildlife Conservation Society’s super field guy, Tim Davenport, has discovered an extremely beautiful, unusual and genetically important venomous bush viper, which he found somewhere in southern Tanzania and he won’t tell where.

Davenport, who was also the discover of the rare kupinji in 2005, has named the snake, the Matilda Horned Viper. (Note that there have been fewer new snakes discovered in the world in the last half century than primates.)

The discovery sheds important light on the evolution of snakes, and separately, on Tanzania’s own history of endemic forests and may ultimately contribute to the debate about why forests declined in Africa, and/or why early man contributed to this decline.

Wow. Lots of good stuff here. But Davenport says there are probably less than “dozens” of these snakes still alive, and so he won’t say where they live.

“It is often the case that the first few specimens of a newly discovered bush viper can be worth a high price and … a sudden rush to collect as many specimens as possible could actually extirpate the species in the wild,” WCS explains.

The genetic study WCS has carried out is sufficient evidence for the snake being considered an endangered species, and if finally ruled so, trade would become illegal. But getting the snake listed will take time, and in the meantime reptile collectors – mostly from America – would likely wipe it out of existence!

This is the really sad.

What exactly would happen?

Well, it starts with the scientific publication of where some new reptile has been found, and that’s why WCS “have agreed with the editor of the scientific journal … where the species description is published to keep the locality as vague as possible.”

Nevertheless, there are lots of clues, and unscrupulous reptile businessmen collectors will probably figure it out. WCS is worried. “Collection from the wild … has reached a level whereby it represents perhaps the biggest threat to Tanzania’s amphibians and reptiles.”

So Davenport is doing something extraordinary. He’s been breeding them, and that’s one of the reasons there’s been such a delay in the announcement. If he breeds enough, WCS may even put some into the commercial market to lower the price and the unscrupulous demand.

The problem is acute in America, because unlike other countries, there are few federal laws regulating owning exotic animals. These laws are largely left to the States, so some have good laws (like New York) and some have no laws whatever (like Oklahoma).

So it’s from Oklahoma that you can buy almost any snake in existence from companies like General Exotics which often goes out of business, then into business and back out of business, avoiding various state law agencies with jurisdiction over citizens who bought from them.

And the owners of General Exotics and dozens of other such unscrupulous companies hold wildly popular “fairs” constantly across the country. And of course when they come to Chicago they can’t bring exotics that are illegal under Illinois law, but they can still take your order!

These are not zoo people or even what I would call animal people. They are cutthroats who don’t care very much about what they’re selling.

But the problem, of course, isn’t them. It’s with the buyer.

The motivation for owning an exotic animal strikes me as wholly strange, but numerous analyses have suggested it falls in that macho category of indescribable subintellectual orgasms akin to anything which tempts fate like fast driving or polishing a gun.

I don’t know. I love to see them in the wild. And what they tell us about our prehistory, and how they contribute to our future lives is an immeasurable joy that you needn’t be a scientist to feel.