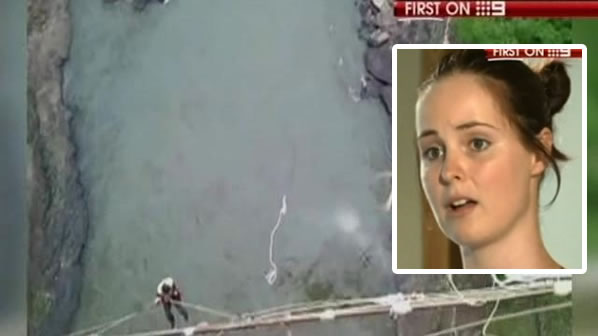 A young Australian tourist who miraculously survived her bungi chord snapping over Victoria Falls New Year’s Eve is back in a hospital in South Africa.

Her traveling companion took a video of the failed jump and it’s going viral on YouTube.

Her survival is miraculous. Remember, your feet are bound when taking the plunge, and she recounted at one point that this binding got caught on something at the bottom of the raging river, so that she had to swim under water to untangle herself.

The video ends showing many of her cuts and bruises. She was a day in a local hospital and then resumed her travels but has since been reported in a South African hospital with a possible collapsed lung.

I’m restraining myself from making too many assumptions about this, because it easily fits into a growing dysfunctionality in Zimbabwe and with all tourist interests that are associated with Zimbabwe. The company providing these services actually functions also as a wholly Zambian company, but its roots are distinctly Zimbabwean.

Unlike here, or where bungi jumping began “Down Under” there is no government regulation or oversight of significance at Victoria Falls. No certification of the operators, no examination of the equipment, no good review of rescue plans.

Discard the yellow journalistic claims that she plunged into a crocodile infested river, by the way. There are lots of crocs in the Zambezi. My 42k canoeing trip in 3 days passes upwards of a thousand, but not where she fell. Crocs don’t like raging rivers, and she fell into the river just after it tumbles off the falls.

We are further hampered by no good bungi jumping accident statistics. They’re likely pretty good. The operator’s contention that an accident is more likely “driving to the bridge” where the activity occurs than on the activity itself may be true.

But if my interest were principally bungi jumping, I wouldn’t do it at Victoria Falls, just as I wouldn’t rent a car there or book my canoe trip right now. And if my principal interest was seeing VicFalls and this came as a secondary interest, I’d suppress it. It’s a lot safer to look at than to look back.

Zambia’s not so bad at the moment, but Zimbabwe is a mess. VicFalls is shared by them both, and anything to do with the river in particular is a joint administration, and given the terror of today’s Zimbabwe, essentially no administration, no safety gauges and no safety assurances.

Right now? OK to look at. Terrifying to look back.