Skip to content
I can’t think of a single animal in Africa, not one, that someone didn’t make a pet out of. And some were extremely dangerous, and many ended up killing “master.” So why are we so obsessed with taming the wild?

I think there are two completely different reasons.

The first I’m sure comes to mind to everyone: a pet that bonds with you trusts you. In today’s world, especially, where there is so little trust between people and institutions, trust is cherished possibly to an extreme.

Many animal lovers will expand this into a variety of more universal themes. John Balzar, Senior Vice President of the Humane Society of the US says that pets “teach us about humility and empathy and loyalty. Their eyes hold the spark of life, the same as ours.”

That’s actually a lot less romantic than some get. But however you cut it, this notion of pure love and loyalty is really one of trust. And we need trust, and if we can’t get it from Mitt or Herb, then we definitely need to get a Lassie. That sounds sarcastic, but it’s filled with truth.

The other reason is less prosaic. It’s become a major part of the developed world’s economy, and PetSmart and PetCo and a thousand other pet cemeteries and pet pharmacies and pet devices have exploited our need for trust. They have mined our innate need to consume.

I walk my Lab, Morgan, in the dark in the morning, long before America is awake. It’s now quite dark. So I went first to PetSmart to buy some kind of light that would hang from his collar and was given a mind boggling choice, and I finally chose a red light, because I didn’t think a white light would be as noticeable. But I didn’t realize until I got in the car that it was in the shape of a heart.

Not that there’s anything wrong with that, but I then went to PetCo and they had a great simple rectangular light that snapped onto the collar. Yes it was white, but by now I had been commercially maneuvered.

When the first dark day came I started with the PetCo white snap-on. Only, it snapped-off, as my Lab loves to dig to China whenever he senses a vole in the area. He’s never gotten a vole, but I’ve seen it run away from him when his head is completely buried in the hole he’s dug. Snap-on bites the dust.

So on went the heart-shaped red light. Well, this one doesn’t just shine, it sparkles. I didn’t feel warm and snugly, I felt like a migraine was coming on. Heartless, now, we walked in the dark.

It reminds me of several years ago when our first feral cat began to approach me, and I spent long summer hours enticing her with food, until now she sits endlessly on my lap purring constantly. But this took a long time, and part of the process was to fashion her a place outside when she was in a winter’s transition.

I took our animal traveling cage and outfitted it with a heating pad and waited anxiously to see if the cat would domesticate herself.

Getting up early one morning, I noticed movement in the cage, got my camera and below is what I so joyfully discovered. 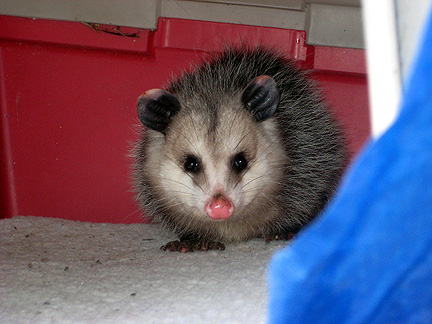