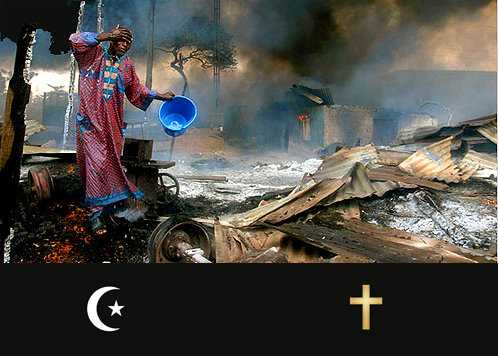 Nigeria is blowing up. There’s martial law in four of its 36 states, bombings and other violence is escalating, and religious war threatens to inflame shaky Chad, Niger and even Mali.

Economic instability always, always produces political instability, and Nigeria as one of the leading world oil producers has economic graphs with low and high points that are remarkable for their spread, showing extreme potential and extreme fragility.

During the relatively prosperous years of most of the last several decades, the country has developed significantly. In fact its economic development sped right past its social and cultural development, and this led in its own way to serious corruption that only recently was considered its greatest challenge.

No more. Nigeria’s challenge right now is to avoid self-annihilation. And tiresome as it seems, it is the classic battle between Christians and Muslims. One which permits no compromise. Accept, or die.

I’ve spent my whole life in Africa watching religion tear apart Africa and mostly as a battle between the world’s two greatest religions, Christianity and Islam, and now I even have to enduring watching it creep into the daily life of America.

One wonders what would happen if youth’s greater perception of the impoverished theologies of the world took hold. How fast can we hope this will develop? Yet if suddenly, miraculously, religion were removed from the bombs of the world, would something else take its place, like ethnicity or poverty?

That’s a question way too complicated to think about right now. In Nigeria, Boko Haram, the underground, illegal but increasingly organized terrorist group proudly affiliated with al-Qaeda, takes responsibility for much of the violence, today. Sharia oriented, today they demanded all Christians leave the Muslim north.

And Nigeria is far more developed than neighboring countries like Niger and Chad which also suffer from Christian/Islam battles. Many Nigerian Muslim clerics are screaming for peace, recognizing that all Nigeria has gained economically is at stake. But the economic gains, the level of prosperity, may not have been enough fast enough to help these clerics get their messages accepted.

The fuel inflaming this always simmering religious battle is the economy. The President of Nigeria has begun to eliminate fuel subsidies, and the scale of the reaction is unprecedented, even in this turbulent country. Many think these will now be rolled back, but it may be too late.

Religious conflict, pricked by economic decline, is happening round the world. In the more developed west fortunately the tone of the religious conflict is moderated into a less violent social/cultural one. Instead of Jesus fighting Mohammed it’s abortionists fighting evangelicals, but in the end it’s all the same.

It’s intolerance, a battle empirically governed by those who have the money and power and are fearful of losing it. When will we ever learn…