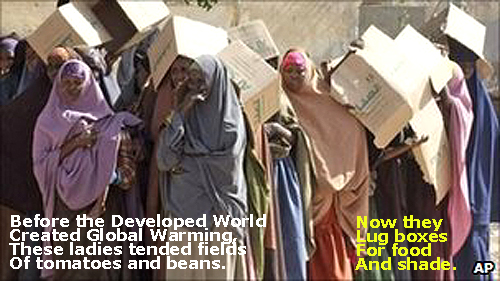 Never mind that Romney, a likely Republican presidential candidate, agrees that global warming is a man-made phenomenon. Never mind that Americans are asked to pay more and more for food aid in East Africa. Never mind that in our own communities we are feeling weather in ways it’s never been seen before.

Look at this map prepared by America’s NOA’s Climate Prediction Center of East Africa. (Then go back and fiddle with the linked map of the U.S.)

Now on the one hand I have no idea why I’m using facts, since facts don’t seem to matter much, anymore. On the other hand, if we bloggers didn’t try to use facts all we would be doing is telling jokes. Problem is, One-in-Three Americans thinks facts are jokes.

The East African map is NOA’s satellite data for the percentage of normal rain that fell in East Africa this May. Although even the normal pattern of East African rain is complicated, because of its position on the equator and between a huge lake (Victoria) and a huge ocean (Indian), this map really tells it all.

May is one of the few months in the year in East Africa when a regular, generally continuous rain falls all over this map. In a normal year, this map would be all white, white being no change from normal.

Instead we see deep light brown to red areas of severely little rain to drought, bordered by areas of extreme rain and flooding conditions (green to blue).

The radical demarcations between areas of drought and flood is a symptom of global warming, and we see that in our own country as well. The Mississippi basin is flooding. Arizona is burning away.

This is new. Historically the areas between radical climates were not so close together. This is Global Warming.

The people living in Tucson and Dallas will still be able to buy tomatoes and beans, even though their land is a desiccated mess. The people in Nairobi and Dar-es-Salaam will be able to, too, for the same reason. These developed urban centers receive food distribution from wide areas around the world.

But for the still nearly 70% of Africa’s poorest countries’ populations that remain subsistence farmers, this is an epidemic far greater than AIDS could ever have become.

Countries like Kenya which are pulling out of extreme poverty find themselves conflicted now when creating social policies, because a significant portion of their population remains subsistence farmers but a rapidly larger portion is not.

This rapidly larger portion is learning how to eat and prosper even in times of drought. But they must still stand on the sidelines watching their Tucsons and Dallases starve to death, because their choice is between their own marginal threshold of prosperity or crisis policies to try to save the dying that likely could sink them all.

The Kenyan government recently dispatched a few million shillings to its northern drought areas, enough to buy food for starving people for a few weeks or so. The country’s elite was outraged at the pitiful effort, but the fact is that Kenya unlike America is not choosing between fighting a war abroad or a single payer health system. Kenya must choose between providing electricity to its new factories or feeding its starving millions.

And in countries like Niger and Mali, Eritrea and Ethiopia, where development hasn’t really got off its bump, whole societies are literally being wiped out by Global Warming.

I’m not really sure even if our own Tucsons and Dallases were starving to death that the One-in-Three Americans would care, or that they would even believe it might be true.

But just as the Rapture did not take us away, Global Warming is taking away whole junks of African peoples. And even though One-in-Three Americans might refuse to believe this, two out of three of us know the truth and it’s time to muster our majority.

It’s time to make a stand and force action. Don’t be bullied by the One-in-Three. We are the Two-in-Three.