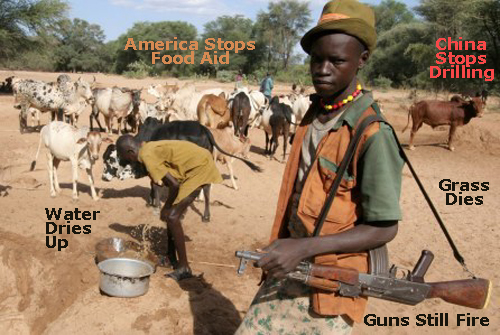 American mostly and some European stimulus in 2009 kept the world going and Africa, in fact, soaring. It’s over, now, and screams of pain begin.

In Kenya which had roared to a near 9% GDP growth, the country’s economy is tumbling. Starvation is on the increase, again. Many diseases like AIDS and TB which had remarkably abated, are increasing … again.

In South Africa where the price of gold struggles to climb higher, fuel prices are soaring contributing to some starvation in poorer communities. And the ongoing Arab Awakening is squeezing the whole continent as tourism and oil production dwindles and America retreats.

Chinese development funds which fired up so much of Africa are dwindling.

All of this is because of the world economic downturn, and that was caused by American greed, by our failure to regulate ourselves fairly and wisely.

And to be sure a much worst situation was averted because of American last-minute stimulus, as American politicians gritted their teeth and did exactly what they promised never to do: grow government to save the people.

That huge stimulus let us still go to the movies. And it produced a boom economy in Africa, where car sales, for example, skyrocketed.

Americans are going to fewer movies. Africans are beginning to shoot one another, again.

What we don’t realize in America is how seriously we effect the rest of the world. I think in part this is because so many Americans preciously hold to the idea that government is an option, and that we are reducing it.

This is the foundation of our misery, the notion that our government isn’t necessary and mustn’t necessarily be big. First of all, it is big! Even after all the shrinkage that has occurred and will occur, still, the U.S. government is massive. Even take away the wasteful and probably immoral military campaigns abroad, it is still gigantic.

The U.S. economy is 222 times as big as the Kenyan economy.

Yet we have only 8 times as many people. That gives every American, in economic terms, nearly a thirty to one advantage over a Kenyan.

And it means whatever we do has an impact probably 30 times as great as we imagine it does.

The whole world must follow whatever happens in America. We have a choice. They don’t.

East Africa is doing it correctly, America is not.

East Africa is increasing its debt to stave a catastrophic tumble into recession.

While America is flirting with an absurd notion not to increase its debt ceiling.

But what Kenya does won’t matter a hoot to Americans. But what America does could save or condemn the new Kenyan economy.

America is not a cowboy roping a single steer for dinner, as many Americans believe. We’re a gigantic, messy megalithic monster of an economy that needs a real tune-up, and one that keeps the brilliance and freedom of that monster moving as nicely as possible.

And a tune-up doesn’t feather the fat cats and starve the needy. Unless it’s a robot devoid of any morality whatever.

And whichever path we choose, we choose it not just for ourselves. We’re imposing the choice on the whole damn world.