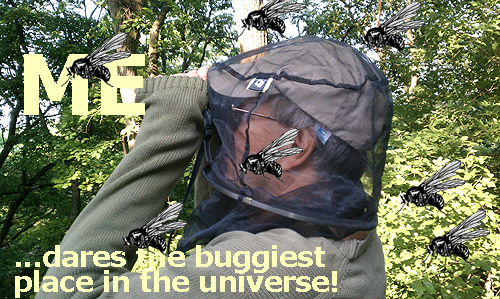 I have been in some of the most uncomfortable, dastardly places on earth. But I just returned from the buggiest place in the universe. Try to guess where this unbelievable, inhumane place is.

Of of the four top worst buggiest places I’ve ever been in, none are in eastern or southern Africa where I spend much of my life. And that’s important, because so many people who are contemplating a safari ask me first and foremost, “What are the bugs like?”

What bugs?! Compared to the four buggiest places I’ve ever been in, my safaris are like being in an air-conditioned hospital.

FOURTH BUGGIEST PLACE ON EARTH:
North of the Brooks Range in Alaska in June. Searching for the great caribou herds, we found black flies. These pesky critters swarm all over the place, and because there’s little wind, it’s like walking through a suspension of underwater gunk.

But we use head nets, and it’s cool enough to cover the rest of your body, and it isn’t constant. There are patches here, and then down river a bit none at all. But when they bite, they seem to insert their entire being into your bicep or drill through the cheek to your upper molar.

THIRD BUGGIEST PLACE ON EARTH:
Lobe River in the Cameroon. I was there one August but apparently the time of year doesn’t matter. This is African jungle at its finest (worst?). This is where you go to find lowland gorillas. Mother Nature here is august and oppressive.

Traveling on long-boats through 105-degree heat, you can’t wait until it rains, and when it rains it’s a deluge and usually the sun still manages to beat the river and jungle like the rays from some alien space ship. And swimming in this torrential sun heated rainstorm are tse-tse like you just can’t imagine.

Tse-tse are called in loose translation by the local Lobe River pygmies “Devil’s Butterflies.” I understand the devil part, but I guess it’s the streaming blood that drips down your limbs from where they bite in the 100% humidity that leads to the notion of butter.

SECOND BUGGIEST PLACE ON EARTH:
Sepik River in Papua-New Guinea in May. Again, season doesn’t seem to matter. The people who live here try to stay up as high as possible with the belief that river mosquitoes can’t fly high, and there is some truth to this. So homes are built on stilts. The higher, the better.

The mosquitoes are so bad that despite the over 100-degree temperatures and humidity so high that what you see through your sunglasses and head net seems like an underwater experience. Good guides point you in correct directions.

The bugs are so relentless that not only do you wear head nets, but literally wrap yourself in zipped up plastic ponchos and jeans strapped at the ankles by tightly fitting boots. The heat and humidity is suffocating, but the unbelievable and incessant buzzing of the mosquito is fair warning that any attempt at aeration is a certain death. It’s like a million miniature saw mills waiting for you to unzip just a little bit.

BUGGIEST PLACE ON EARTH:
Yesterday, and the day before, and the day before that, I was in the buggiest place on earth. It’s my responsibility to walk the dog in the evening. And early Saturday morning I helped the local expert do the USGS bird survey for northwestern Illinois. 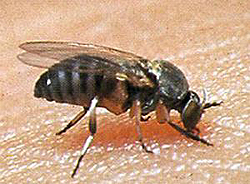 Yes, northwestern Illinois in June. Black flies, known also as turkey gnats or buffalo gnats. Of the four buggiest places on earth, these are the bugs have adorned my face, neck, arms and fingers with long lasting welts.

And this is not just an old man developing new allergies. I have been in probably the dozen buggiest places on earth, and this is, hands down, the buggiest.

The entire midsection of the United States is swarming.

My home town bugs are tiny, humped-back flies (ergo, “Buffalo” gnats) and some people call them turkey gnats but they’re one of more than 255 kinds of horrible bugs in the black fly family.

They are blood suckers “with a hankering for exposed skin on the face, neck and ears that … buzz into your eardrums and mouth, crawl under your sunglasses … looking for just the right spot to bite,” writes Mark Bennett of the Terre Haute, Indiana The Tribune-Star.

Outdoor crews whether landscaping or fixing power lines are in retreat this year.

According to Bennett, the buggers leave “a welt, which swells and itches for days and days.”

Why such an infestation? One good reason seems to be that we’ve cleaned up our rivers. These progressive insects only like to breed in pure, pretty fast moving water. Our battle against pollution is compounded by higher and faster running rivers each spring in this era of Global Warming.

There have been many reports in my home near the Mississippi River of bluebird fledglings dying from repeated bites. Several years ago in southern Indiana and Mississippi there were reports of thousands of farm animals killed.

Right now, today, it is literally impossible to walk outdoors without being swarmed by them.

But I’m told as it gets hotter and hotter, they will go away. That’s hard to imagine, as it’s already 95 today. But apparently as the clean water temperatures in which they breed reach a certain level, they die out…

People use vanilla extract, Absorbine Junior and Victoria Secret skin oils as repellents. I use a head net. The only certain way to avoid them is to go on an African safari.