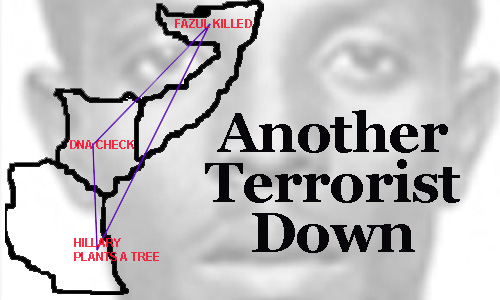 Fazul was the avowed mastermind of the 1998 Kenya and Tanzania embassy bombings. He was arrested shortly thereafter in Kenya, but escaped. It was widely presumed, and now confirmed, that he founded and headed Al-Shabaab, al-Qaeda in the Horn of Africa.

Somali is a perfect haven and training ground for terrorism, and like most of the world’s training grounds for terrorism it was first cleared and sowed by Americans. But unlike Afghanistan, where bin Laden was our partner before our nemesis, Somali’s demise was because President Clinton abandoned it after the failed Blackhawk Down mission.

But whether we nurtured terrorism or failed to nip it in the bud when we could have, America’s policies until Obama failed to nail them.

Don’t misunderstand me. Obama is not one of my most favored persons. Domestically I think he’s exchanged the garb of a Badiou for a Mainliner. But events in recent weeks prove that his anti-terrorism strategy is working.

Fazul’s apprehension received limited reporting, because there are so few journalists in Mogadishu. The conduit for the stream of events came from Nairobi’s Daily Nation, and it appeared rather scripted to me.

Presumably Fazul was in a truck filled with everything from medicines to laptops to guns and $40,000 in cash, and made a wrong turn in the city, taking him into a part of the city Al-Shabaab did not control.

Right. I know they don’t have Garmen in Mogadishu, and Google maps is a little behind the times there, but this guy blew up the Nairobi embassy, a few years later blew up a Mombasa hotel, fired a SAM missile at an Israel charter jet landing in Mombasa (admittedly, missing it).

And almost single-handedly Fazul took over 2/3 of what was once the Somali nation, and was remarkably close to taking over Somali’s biggest city and presumed capital, Mogadishu, where Al-Shabaab has been fighting brutally and almost hand-to-hand for nearly 4 years.

He made a wrong turn on a city street? After eluding the world’s posies for 13 years, a $5 million reward, and the scorn of practically every African in the region?

Well, that’s the story fed to the Daily Nation.

I’d tell it differently. Oh and by the way, Hillary just happened to be in East Africa for the event.

And she wasn’t in Kenya to partake of the celebrations, because they really did celebrate in Nairobi. More than 200 Kenyans were killed in the embassy bombing and thousands injured. Read the comments’ section that followed the main on-line story to get a feel to how people there, think.

So unlike Tanzania. And that’s precisely where Hillary was, ostensibly to promote enhancing agricultural development policies. But I bet there were a few staff members accompanying her who weren’t farmers.

Because Tanzania is the problem, still. It has yet to be successfully pried open to greater democracy and transparency, as Kenya. Corruption is a bigger problem than Kenya if simply because the government controls so much of the media we know less about, but what we do know is giant enough.

When Mogadishu authorities announced the story, they refused to let the few reporters there see very much of the evidence against Fazul. His DNA was jetted to Nairobi to confirm it was him, and one picture was given to a Nairobi reporter who said he was shot in the head and breast.

Doesn’t sound like an open battle firefight, does it?

And the one piece of evidence shown to the press was his passport. A fake South African passport with only one visa stamped inside, representing the only country that he has easily passed in and out of in the last 13 years. Any guess?