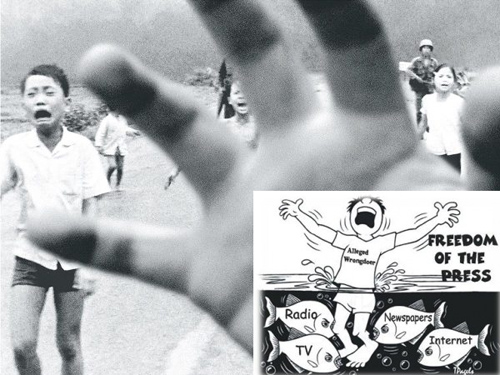 Is shooting journalists better than tuning in Rush Limbaugh? Tanzania has a freer press than the U.S., according to this year’s report from Reporters Without Borders (RSF). Hmm.

This year’s RSF report is the tenth year running that ranks all the countries in the world in terms of “press freedom”, although I think that’s far too simplistic a characterization. Please read on.

Over this nascent first decade the group has tried again and again to refine its method of determining press freedom, and this year’s is the most complex of all. It’s no longer just how many journalists have been shot to death, but things like how “effective” the media is in terms of honest reporting and self-censorship.

That’s the reason, for example, that Fox News helped sink the United States so low, 47th.

“Free” is not exactly the right word, here. But there is a singularly important lesson to be learned from the fact that this year Tanzania is ranked 34th and the U.S. 47th in freedom of the press, by what reporters widely support as their outstanding global advocate.

And that lesson might be that you can have too much of a good thing.

The media in America has exploded in the last decade, especially with cable television and satellite radio, not to mention us bloggers. There’s so much news that maybe, just maybe, there’s less aggregate truth. RSF incorrectly characterizes this as “freedom of the press.”

America’s position plummeted below most advanced countries in 2006, guess why? Weapons of mass destruction. Bush administration outright lying, suppression of whistle blowers, and probably most importantly, the wholesale buy-in by media across the whole spectrum of these lies and half-truths.

So the incredible and powerful foolery of America’s press ended up, from RSF’s point of view in 2006, being equal to the killing and beating of a couple journalists in Uganda and Kenya during their turbulent political events that year.

And what about all those reporters who were convinced – and convinced us – that the housing market, hedge funds and derivatives, were just honky-dory?

There are plenty of media outlets in America truthfully reporting that there has been steady growth of private sector jobs in the last 18 months. Freely reporting the truth.

But there are also many outlets, some very effective like Fox News airing again and again the Republican Radio Address by Mark Rubio saying just the reverse, propagating an untruth. Freely reporting falsehoods. Or choosing not to report truths.

Today the Labor Department announced jobs numbers in the U.S. that knocked to the floor most economists. Good, surprising — so surprising a cynic could be motivated. But instead, excellent media outlets like On Point Radio hardly mentioned it at all. Because … American media is currently obsessed with the election.

RSF analyzes all these failings as “less freedom.”

In Tanzania there is so little media, what exists is rather moderate if benign. Tanzania’s media is heavily self-censored, and not necessarily because of government threats, but just because it’s so incredibly small.

Most Tanzanians get their news from Kenya where the media is much larger, and where the media doesn’t report a lot about Tanzania. So the sum total of bad stuff or stifled stuff or self-censored or just got-it-wrong stuff in Tanzania, percentage-wise, is less than in America.

So we have less truth in America than Tanzania?

Hmm. Yes, but we have enormously more truth available to us to find than Tanzanians if we can just decide which newspaper, which cable show, which magazine, which blogger to read, and therein lies the critical understanding.

An interesting point, isn’t it? Whether we’re southsiders in Chicago or urban cave dwellers in Dar-es-Salaam, the vast majority of us all want to know the truth of what’s happening in our society.

On the one hand I’m thrilled that someone, RSF, is at last being courageous enough to deal with “truth.” Like PoltiFact and FactCheck and good high school teachers should. But on the other hand, I fear RSF is working with an emulsion not a solution.

Tanzania’s collected sum of radios, TV, blogs, newspapers, magazines is a pinhead compared to America’s Rushmore. Even if everything that was ever reported in Tanzania were completely false, it wouldn’t begin to equal the amount of false reporting in America.

In America if Romney wants to pretend he didn’t mean he doesn’t care about the poor, there are ample millions of ways for him to do so. Not in Tanzania. There’s not enough distribution for spinning a mistake. You could think of this as a blessing in disguise. But it also means that the powers-that-be and want-to-be have fewer recourses to manifest their power. Like sending police out to shoot journalists.

RSF is saying that shooting journalists could be better than tuning in Rush Limbaugh. 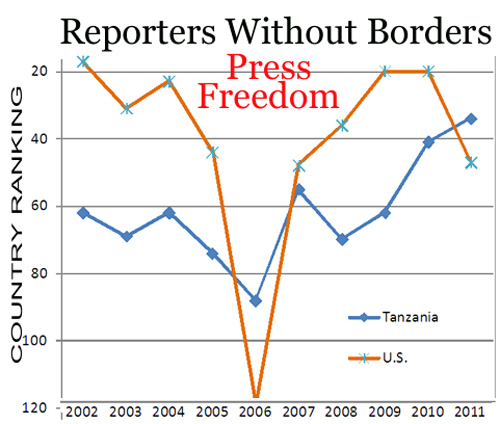