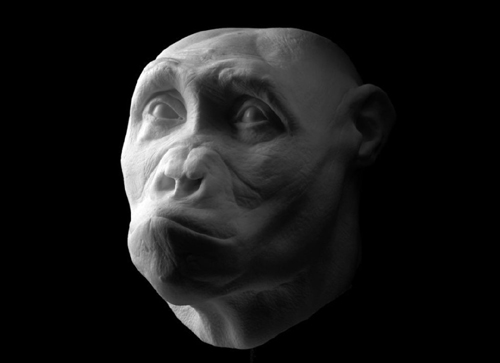 Over my lifetime the study of man’s evolution developed as explosively and quickly as NASA’s mission to the moon. But unlike NASA’s manned space flights, the science of early man just keeps rocketing out to the very edge of time.

This is my 6th most important story for Africa in 2012. To see a list of all The Top Ten, click here.

Did scientists in 2012 at long last, after decades of quibbling and backstabbing as well as serious argument, finally find our direct human ancestor?

When I think back to when I was boy and that the sum total of all knowledge about early man was Mary Leakey’s discovery of the “Nutcracker Man” (Australopithecus boisei), it’s absolutely astounding to think of how much more we know, today.

In sixty years we’ve learned 6 million years worth of old man treasures. It’s mind blowing. Back in 1959 when I read about Mary Leakey’s discovery in the “Weekly Reader” it probably contributed enormously to the fact my life would be dedicated to Africa.

Scientists had found proof that we humans had evolved from much more primitive beings who roamed a pristine earth almost a million years ago. (Later science would become more accurate and determine that Nutcracker was closer to two million than one million years old.)

Everyone thought back then, scientists included, that this skull represented some creature that was our direct ancestor. Scientists had already discovered early giraffes and Mastodons and Sabre Tooth Tigers, and with few exceptions all these old creatures seemed to be precursors to ones that lived around us right now.

How that’s changed! Since Mary Leakey’s discovery, about 10,000 other unique hominin species fossils have been found! And we know there were at least 2 dozen different hominin species, not just one. All of them but our precursors died out, went extinct.

That incredible notion, that there were “men” species as diverse and unable to interbreed as the different kinds of antelope on the veld or different kinds of whales in the ocean was absolutely astounding. Imagine old Nutcracker man walking around the veld, competing maybe fighting maybe running from, other early men who were so different from him genetically that they couldn’t interbreed.

With time we learned how many of these competing hominin there were. Maybe 6, or 13, or 27 as scientists made more and more discoveries. With time we could paint a picture of an earlier earth with all these guys, some much smarter, some much more agile, some much stronger, all competing in a world that was growing increasingly colder and less fecund.

Scientists came up with all sorts of exciting presumptions. Perhaps the reason Nutcracker’s species didn’t survive and evolve long enough to become us was because Homo Erectus ate him up!

Perhaps the reason that Neanderthal with a brain size much bigger than Homo Sapiens succumbed to our species was because early Homo Sapiens had a better language capability, because our early ancestors had a larynx and Neanderthal didn’t, so could make 250,000 more sounds than Neanderthal!

No one back in 1959 would have imagined such a rich and complicated evolutionary history.

And now, it seems, we come almost full circle.

Over the years all sorts of presumptions have been made regarding which of all these species of early man finally evolved into us. For a long time it was presumed that Homo Erectus was the real progenitor: Peking Man. His brain size was 950 cc (ours is around 1300 cc) but most importantly, he has been found almost all over the world – he migrated.

Then there were scientists arguing that an even more primitive version, Homo Habilis, was the true precursor. This theory was boosted not too long ago when scientists determined through DNA analysis that all men living today on earth came from a small band of individuals who left Africa only 50,000 years ago during a period of severe climate stress.

Peking Man was nearly a million years out of Africa. So he had to have died off.

And there were other candidates, recently ones like the recent announcement of an Ethiopian skeleton of Ardipithecus kadabba.

Some of them, like the Neanderthal, may have actually been smarter and better adapted physically to earth than we are. So we didn’t necessarily survive just because we were the best thinker or strongest builder or cleverest fighter. But ultimately we are the “best” in some composite sense masterfully explained by natural selection.

But the greatest irony you can imagine has brought the story full circle. A far distant cousin to Mary Leakey’s first breakthrough discovery of early man, may indeed be our most direct ancestor.

Sediba, found near Johannesburg nearly ten years ago but encased in stone so it took this long to extract the fossil, may be our closest paleontological relative and the reasons why have flipped the science on its head.

There’s something very uncomfortable with the notion that the very first old man fossil ever found, predating all sorts of creatures that would evolve with different kinds of brain and teeth and fingers and toes – all a massive evolutionary explosion of mankind’s remarkably varied attempt to survive – turns out to … be the one. The real direct ancestor to us.

The chance seems just so slim.