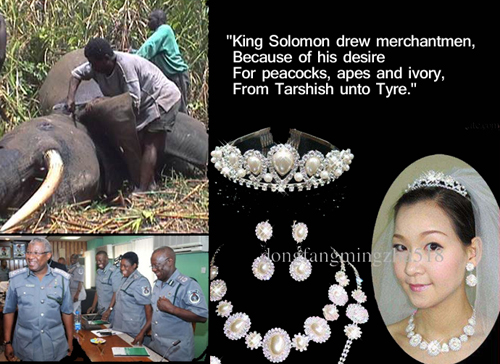 Big game poaching is not new, never abated to the point of becoming incidental, but 2012 was a year in which poaching got dramatically worse. Why? And what to do?

My #5 Top Story of 2012 is the complex and very sad chronicle of Africa’s big game under enormously new onslaught. To see a list of all The Top Ten, click here.

And lacking good statistics it remains fair to say that the poaching today is nowhere near as massive as it was in the horrible 1970s and 1980s when elephant were almost extirpated. There are still lots more elephant, today, than at the end of the 1980s.

I’m very disturbed, though, by how the media has exaggerated the situation. There’s no need for exaggeration. The truth is bad enough. But it results in the media totally ignoring some fabulous successes with anti-poaching, especially with quelling the market for ivory.

And I have previously brought up the very uncomfortable idea that poaching in East Africa is the same as culling in South Africa. This complex notion can, indeed, be argued that there’s no better possible situation than the status quo. That doesn’t make it right, by the way.

So while the quantitative problem of poaching today pales in comparison to the 1970s and 1980s, and the public has been unnaturally jigged up by sensational media in particular, the qualitative aspect of poaching today is, indeed, much worse than before.

There are two main differences with the decimation of elephant in the 1980s and today: today a lot of poaching is by individuals, or small bands of unorganized friends, in very ad hoc ways as opposed to the large corporate poaching of the past. Secondly, there’s every indication that poaching is being used as a politically global football fully open to bargaining.

The involvement often at the global level of very powerful institutions … like banks is new and horrifying. In America in particular the “lay-off more bank regulation” which has followed the cavity they caused in the global economic order is allowing the important and rich middlemen that transit the animal part from its home country to its market country to flourish.

And on the more patent political level, “national security” is becoming a determinate in establishing a de facto level of poaching rather than the moral argument which prevailed in the past, so that the previous presumption that elephant poaching was immoral is being usurped by the argument that it contributes to terrorism.

It’s unfortunate we don’t have good summary numbers. Asia, especially Thailand and India, and South Africa compile good numbers on elephant populations and poaching. But no one else does.

We can scrape up numbers for individual ecosystems, like the Serengeti, but even simply combining the Serengeti with its Kenyan neighbor, the Mara, grows difficult to impossible.

The main reason for this is that most African countries do not want researchers to know the real numbers.

But there are enough “scraped up” numbers, anecdotal reports, public scandals and especially confiscated attempts at ivory shipments to give us a reasonable view of what’s happening.

In the last few years Tanzania has hired and fired more wildlife officials and Ministers with wildlife portfolios than Liz Taylor did with husbands: Researchers as well as local Tanzanians are growing increasingly fed up with corruption and obfuscation.

Because while most of Africa’s elephant population is happening in Tanzania, so is it the pinnacle of East African safari tourism. There is less empathy locally in non-South Africa Africa for wild animals than from us, outside. But when considered in the context of tourism, there is widespread consensus that poaching is bad.

So why, then, is it getting worse?

My opinion is that the global economic recession is principally to blame, but not for the evident reasons you might think.

Africa did fairly well overall during the recession. As did Asia. But the five years since the market collapse have nonetheless massively impacted African and Asian economies, most notably by increasing the gap between rich and poor.

Huge numbers of Tanzanians, like huge numbers of Chineese, have become extraordinarily rich over the last five years. Even as Dar’s slums have exploded in size and China’s rural populations have suffered a decline in standard of living.

According to the African Wildlife Trust, “The vast majority of the illegal ivory …is flowing to China… China’s economic boom has … push[ed] the price of ivory to a stratospheric $1,000 per pound on the streets of Beijing.”

We don’t know for sure how this devolves to the individual poacher trying to sell his illegal cut on the streets of Morogoro, but the best estimates is that a typical 20-kilo tusk nets the poacher 2-3 years annual wage. And most elephants have two tusks.

In an economic environment where the untrained, unskilled adult is struggling with farming in climate change and squeezed by increasing dry goods prices, the allure of poaching is real. Combine this with a growing sentiment among urbanized people worldwide that there are too many wild animals, a market in China controled by individuals with no empathy whatever for big game preservation, corrupt local officials on the take, and you have all the ingredients for tacit acceptance of this otherwise illegal trade.

Groan if you will, but there are no simple answers. We’ve entered an extraordinarily complex era in African development, particularly in East Africa. Increased poaching is a part of this, but understanding that as a complicated, nettled component of contemporary African society much less global capitalism is necessary before anything at all can be done.