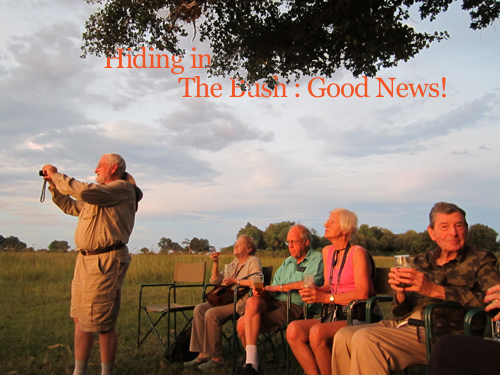 Four of my most important stories for 2012 were basically great, good news! Exciting discoveries in science in Africa, growing strategies for peace in Africa’s troubled regions, and my having guided an old friend and client, the Don of American zoo directors, Les Fisher!

These are my 6th to 10th Top Ten Stories. To see a list of all The Top Ten, click here.

#7 : China Partners with U.S. for Peace in Sudan
The world’s two most diametrically opposed societies have struggled uncomfortably ever since shaking hands during the Nixon administration in the 1970s. Whether it be over world wars and conflicts, climate change, human rights – you name it, we’ve been at odds.

But this year the two adversaries teamed up to make peace in The Sudan. This is terribly exciting.

Two years ago South Sudan became its own nation after years of civil war with The North. That in itself was amazing, and in no large part because of enormous initiatives by the Obama administration.

But the border between the two has never been completely demarcated. And it goes right through the most productive oil fields in the area, and so border disputes spilled over into outright warfare.

China and the U.S. got together and stopped it. Period.

It is an amazing geopolitical development, because the U.S. is heavily invested in The South, and China, in The North. But rather than parry their positions, they negotiated them for peace.

Unfortunately, trouble persists in both countries not due to this grander conflict. Darfur remains troubling for The North and The South’s northwest states are close to open rebellion.

But the grand deal signed earlier this year between the two hostile siblings of the once singular Sudan state remains laudable.

#8 : Breakthrough Discovery for Malaria Eradication
The devil is in the details to be sure, and despite a generation of unprecedented research and global aid, malaria finds ways to evade suppression. But this year a new genetic discovery might finally herald a definitive way to eradicate this disease that is so devastating in Africa.

Malaria is such a tough candidate for making a vaccine against because it’s really seven different types of life forms. True, it’s only one of the stages that infects us, but that one has proved terribly difficult to fight against.

If we could simply interrupt the change of life forms from one to the other, we’d do the trick. And now, a new genetic discovery gives us a guide towards finding out how to do that. It’s complicated, but perhaps the most promising new science regarding malaria in my life time!

#9 : African Arms Dealer Finally Prosecuted in U.S.
It’s no secret that you can’t fight a war without a gun. But the west – and especially the U.S. – and Russia have suppressed this evident fact because their war machine economies are so important to their overall economies.

And what’s even more embarrassing is that several of the most prominent arms dealers have lived as foreign visitors on extended friendly visas for some time in the U.S. The presumption has to be that the U.S. felt some advantage for letting them stay here.

So it was striking that finally the Obama administration actually began to prosecute arms dealers in a way past administrations, including back through Clinton and Reagan, declined to do.

Viktor Bout, a Russian, was convicted after a full court press by the Obama administration, suggesting more such prosecutions are on the way. This is an African story, because that was the turf on which Bout played, heavily involved in the most recent wars in Liberia and Sierra Leone.

#10 : Les Fisher Goes on Safari at 91 years old
The Don of African Zoo Directors who helped pioneer some of the first American adventure travel in Africa took a group of small friends on a not-so-easy safari into Botswana in the hot season.

I’ve guided Dr. Les Fisher on at least a dozen safaris over the years, and we’ve been in some of the most remote parts of Africa, together.