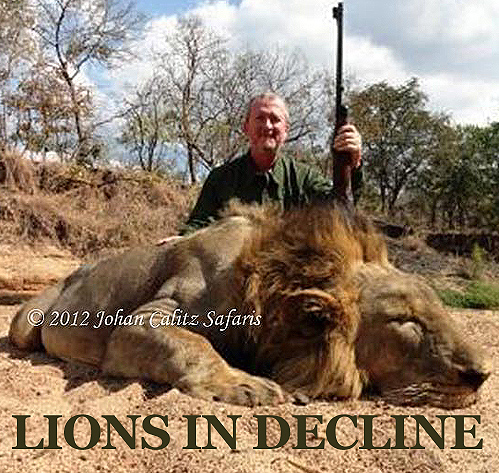 Zambia’s decision yesterday to ban the hunting of cats is electrifying and marks a new movement against big game hunting in Africa.

The tourism minister told the BBC, “Tourists come to Zambia to see the lion and if we lose the lion we will be killing our tourism industry.”

From my point of view the announcement is actually more important than Botswana’s announcement a month ago to ban all hunting, but taken together, this is striking.

Despite Botswana’s wild game biomass probably exceeding Zambia’s (and this is absolutely true with regards to elephant), Zambia probably has more cats, and for sure it right now has much more big game hunting.

Next to Tanzania, Zambia is the most sought after country in the world by big game hunters. This is because it still has very large tracts of land open to all types of big game hunting.

Botswana banned hunting lions in 2002, severely restricted its other hunting quadrants in 2007 and in 2009 essentially closed all the good hunting areas in the Okavango. So the announcement last month to end big game hunting everywhere in Botswana for good was actually an incremental move.

Zambia has actually encouraged hunting to the point of government involvement in hunting trade shows. Yesterday marks an incredible and fairly abrupt about face. Why?

I don’t want to get into the argument of whether hunting is truly a conservation technique or not, because in its purest form I actually believe it is, and I know that riles a lot of people. And I’m no hunter. But properly sanctioned hunting can essentially do what the South African rangers do in Kruger National Park: cull.

While earning the government a hefty dime for letting a foreigner do the job for them.

But we don’t have to argue that. Although that’s the theory under which virtually all African countries sanction big game hunting, I can’t think of a single one – South Africa included (with the current rampant increase in corruption there) – where anything, much less hunting, is done the way it’s supposed to.

So instead of 1 or 2 elephants hunted out of quadrants assigned by the government per season and overseen by licensed big game hunters, you have dozens of elephants, antelope, lions and anything else that moves, blasted to smithereens often by unlicensed amateurs with little regards to the stated conservation policies.

All it takes is bribing the right officials, and if not that, the local communities near the productive hunting areas. Big game hunting in Africa today more resembles the business of poaching than it does Ducks Unlimited.

Maybe, maybe with the Zambian announcement yesterday we can say this is changing.

Hardly a week ago the head of Zambia’s big game hunting government bureaucracy was fired along with 4 close officials. The official reason was for “irregularity in awarding [hunting] licenses.”

I think the current Zambian government, relatively new and among the better in years, discovered as it dug into the dirt under the animals a den of iniquity. I really think that Zambia’s move is an incredibly laudable one and should be seen in terms of government transparency rather than conservation.

Nothing is ever clear in Africa, and to be sure, the increase in poaching and decreases in some large animals – especially cats – forces the accountant to begin analyzing the cost/benefit ratio of hunting versus tourism.

And in that one, tourism has been winning for at least the last decade. The cost of hunting had been much greater than any form of non-hunting tourism. But with today’s incredibly up-market safari properties, a wildlife photography safari can be just as expensive as a hunting safari.

With just as many taxes for the government.

In any case, we now have three of Africa’s most famous big game countries (Kenya, Botswana and Zambia) either completely restricting big game hunting or severely so.

It’s a very important milestone in the history of Africa’s big game.