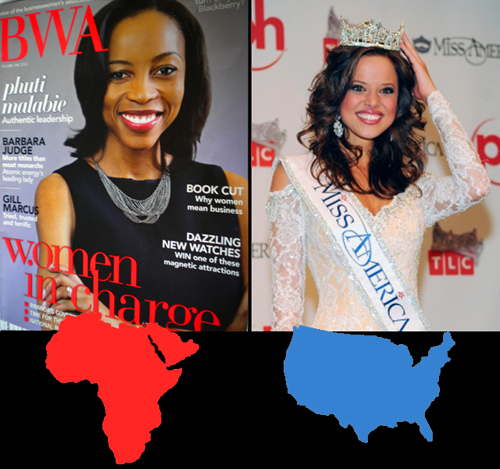 Many societies in Africa are daring to challenge the oppression of women in a way that if even partially successful will leave America in their dust.

Both the young Kenyan and South African constitutions mandate up to a third of public positions be filled by women and many of the other African countries are not far behind. This is government policy that America refuses to adopt: the ERA was past by Congress in 1972 but withered on the vine for wont of enough States ratifying it.

Last year House Republicans barred women from testifying in hearings to examine contraception. Numerous States like Virginia are thumbing their noses at women while forging proudly ahead with obviously unconstitutional acts of total repression against one gender.

You would think we live in some parallel universe with the modern world. European clients who I guide in Africa simply can’t fanthom what’s happening in America. “I consider myself a conservative,” a recent British client told me, “but America is regressing back to the Stone Age.”

Sunday’s Daily Nation newspaper in Nairobi featured a story about a Somali refugee woman who suffers the same kind of oppression that women in Virginia do. It made me realize why Somalia will be so hard to put back together, and why the American poles are fracturing so far apart.

It was published as a true story, but not one ferreted out by a journalist, rather the result of a letter sent to a columnist. First-person stories are often suspicious, but from my experience in Africa this one rings true. And even if it isn’t true, it gives me personally an explanation for the lunacy running through America, today.

“My name is Khadija Hussein,” the letter to Nation columnist Murithi Mutiga began. “I fled the fighting in Hawl-wadaag district of Mogadishu due to the tribal civil war in 2006.”

Khadija explained that her husband was lost in the fighting, that she was pregnant, and she described the difficult 100 km trek to the Kenyan border to escape. The first person she saw over the Kenyan border was a Ugandan businessman, a Christian, who took pity on her. He helped her get to Nairobi, monitored her pregnancy and actually returned to Nairobi when she gave birth.

They then married. When the Somali community in Kenya learned of Khadija’s marriage to an “unclean kaffir” they vowed revenge.

This revenge wasn’t just the threat of throwing acid in Khadija’s face. The power of the extremist Somali culture went all the way to Uganda, where Khadija’s husband’s business was burned to the ground. This was the way Khadija’s kinsmen restored her lost husband’s “honor and dignity.”

“I won’t and can’t separate from my husband even if he is a Christian,” Khadija ends her story.

Honor and dignity. Which side in this story truly has it, and which doesn’t? Clearly Khadija sits atop the moral high ground, but at great peril.

In America it’s the same. Honor, dignity, freedom … these are the words used by Virginia legislators to mandate vaginally intrusive searches of Virginia citizens to enforce a hyped ideology. They are words that meld into little meaning except selfishness so severe morality is twisted upside down: those who refuse honor, dignity and freedom to all but their own powered elite. This is government intrusion so severe it cripples the culture, much less simply being immoral.

The intransigence of belief becomes the essence of evil.

Fortunately for Africa, Somali is widely considered in the “Stone Age” by the youthful politics and governments governing most African society, and that was exactly how columnist Mutiga framed it: Khadija’s story is unique and alarming by the standards of most modern Africa. For America? Where ranks Virginia?

Given given all the extraordinary women in America in the halls of politics to corporate boardrooms, when Forbes magazine chooses its woman of the month as the creator of panty hose, I fear that Virginia will never become the pariah Somalia is in Africa.