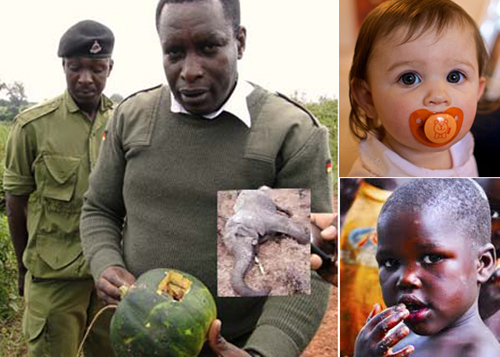 Today Tanzanian officials confirmed that a pesticide banned in the US but still produced by an US agrochemical giant is killing elephants and people in East Africa.

The pesticide Aldicarb, responsible for a wave of child deaths in California in 1985, is banned from use in the U.S. and 60 other countries, but the EPA agreement with the manufacturer, BayerCrop Science, allows the company to still market, license and distribute it worldwide.

(As you can see from the comment section below, I over-simplified when referring to BayerCrop Science as an “American company.” When the drug was first found to be too dangerous to use in the United States, it was being manufactured by Union Carbide. But in 2002, more than 15 years after the litigation was in process, a newly-formed German consortium, BayerCrop Science, bought many parts of Union Carbide, including the manufacturing plants for Aldicarb. Aldicarb continues to be manufactured in the United States. It is simply that the ownership of the company has changed from American to German.)

So children and elephants are now being killed in Africa, because the American company continues to market and license it.

Again and again EPA agreements with big agrobusiness stop their murdering in the US but don’t shut down the production to stop the killing worldwide.

I wrote earlier about children and lions being killed in Kenya’s Maasai Mara with Carbofuran, manufactured by the US FMC Corporation. Like Aldicarb, Carbofuran is banned in the US and many other countries.

Of the 9 elephant poached in the Manyara and Ngorongoro regions of northern Tanzania this year documented by the Wildlife Conservation Society, officials presume watermelons and corn poisoned with Aldicarb were responsible. The Arusha Times reports that 14 elephants have been poisoned by the drug.

Today the Communications Manager for the Ngorongoro Conservation Area Authority, Adam Akyoo, stated unequivocally that Aldicarb was responsible for poached elephants found two weeks ago. At a news conference he displayed a watermelon that had holes drilled in it that was found near the killed elephants, and he presented a government chemist’s report confirming the holes were filled with Aldicarb.

Powerful pesticides like Aldicarb and Carbofuran are cheap and effective, as any strong poison is. In places like urban India both are used to control rats in the home. Aldicarb has proved specially successful in killing insects that threaten cotton crops.

In the developing world there is a heart-wrenching understanding that the use of such dangerous materials might be better than letting farmers’ marginal livelihoods be threatened or children getting plague and other rat-born diseases. A major debate in the world right now is whether developing countries should use DDT to eradicate malaria, as many in the developed world had done decades ago.

Part and parcel to the DDT debate, and near identical to the debate on global warming, is that the developed world must transfer wealth in some form each time the developing world concedes strategies that it otherwise believes remains overall beneficial to its society.

Yes, of course, this should be done. And it has been done on numerous occasions and continues to be through numerous debt relief programs between the developed and developing world. There’s no reason that pesticides like Aldicarb and Carbofuran can’t be included in these agreements.

In 1985 2000 people, mostly children, fell ill in California after eating watermelon on the 4th of July that had been dusted with Aldicarb, and this is what began the process that ultimately resulted in the pesticide being banned in the U.S.

Certainly that many, if not exponentially more, have died in Africa.

Advocates of the pesticides, most prominently the agrobusiness manufacturers themselves, argue that it is the prerogative of the each independent country to ban, or not ban, the product for sale. And that we have no right to force our beliefs on them.

DDT, Aldicarb and Carbofuran are indiscriminate killers, and American companies should not be allowed to produce or profit in any way from them. Like many nuclear weapons, the method of manufacturing these pesticides is public.

If Indian companies want to make Aldicarb, they don’t need BayerCrop Science’s permission to use the company’s patent. They can figure it out themselves and would, if global patent law didn’t prevail – which it doesn’t when the US patent holder is finally stopped from any manufacturing.

American corporations should not profit from making murderous stuff and spreading it around a desperate world. If this is capitalism, then it’s time to dump capitalism for something less deadly.